Hutterite colonies are often self-sufficient, raising much of the food that is consumed. Different kinds of farm animals and poultry are raised, such as hogs, cattle, broilers, geese and ducks.

Livestock operations have grown in size over the past few decades. Whereas, the operations used to be fairly small, operations are typically quite large, with the majority of the animals produce sold into the available markets. For example, a typical large hog operation can produce up to 15 or 20 000 hogs for market. 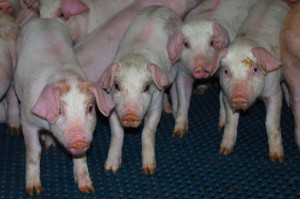 Some colonies in Canada have dairy barns with require expensive, governmental-controlled quotas. These quotas regulate the amount of milk produced in order to ensure a dependable and stable supply and to ensure a fair return for the producers. Without a quota, farmers can not produce milk for the marketing boards; in fact, it is illegal to sell milk outside of the marketing board. As one would expect, obtaining a quota is very expensive. As a result, fewer Hutterite Colonies can afford to obtain them. There is no quota system in the United States.

Poultry like chickens, turkeys, geese, broilers and ducks are also raised by many colonies. In Canada, chicken, broilers, and turkeys are all regulated by the appropriate marketing boards, thereby making it difficult for new producers to come on board due to pricey quota costs.