The election of a ministers is indeed a very important and solemn affair, overseen by the Elder of the Church and affecting everyone on the colony. This ceremony is modeled after the selection of a replacement Apostle as described in the Book of Acts.

The three groups of Hutterites (leut) all choose their minister in a slightly different way. For all three groups, a layman will be selected as the minister and he will be chosen by lot.

Among the Schmiedeleut, every member of the afore-mentioned witness brother (Zullbrueder) nominates two married, male members who are in good standing with the church. Anyone with two votes is nominated. The nomination process usually occurs the day before or the Sunday before the actual ceremony. 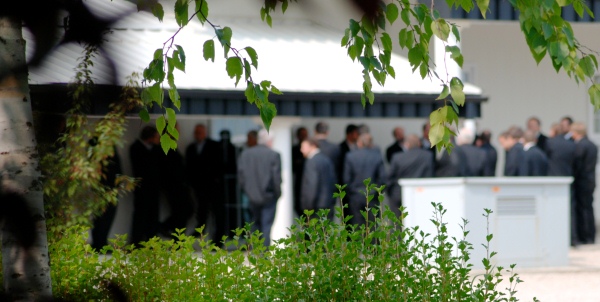 The minister election ceremony (predigor stimmung) is attended by many visitors, and usually by the Elder of the Hutterites. A special sermon is delivered and a special prayer is prayed to ask for God’s help and guidance in the matter. Then all baptised male members in attendance, visitors included, votes for one of the nominated brothers, by verbally submitting their choice to the senior ministers who’s leading the service. Anyone of the aforementioned nominees with five or more votes is deemed suitable. After an earnest prayer to God for guidance, the nominees’ names are placed into a hat and lots are drawn by the Elder or another senior minister. The person on whom the lot falls becomes the new assistant minister of that colony.

Among the Dariusleut, when a community is in need of a Prediger, the community council first nominates eligible candidates for the ministry. Two to four candidates are selected by the elder minister and then the councils makes their arguments for or against each candidate.
Those candidates chosen by the council are then voted on by all the baptized, male members of the community. A candidate needs 5 votes from the voting community members in order to become a nominee and be eligible for the Predigerwahl.

This is different than the Schmiedeleut, where only the witness brothers cast nomination votes.
The nominating meeting usually occurs a week before the actual Minister selection service.

A special church service is held on the Sunday of the minister-selection day.
At the Predigerwahl, the entire council must be present and each council member must witness and support the nominees. And if any councillor has grievances, these are debated and resolved right there. Nominees can be rejected right there for a variety of reasons.

Then, all the council members and all the visiting ministers cast a ballot for any of the previously nominated brothers. Everyone else leaves the Church during this time. The ballots are placed on a table and counted. Whoever has more than five votes is considered a valid nominee for the final lot. One slip of paper is placed in the hat for each valid nominee. A regular fedora hat is used as a container for drawing lots. One of the slips of paper contains the word “Prediger” or minister.

At this time, the brothers who had left the church building are called back in. A special prayer is held asking God to grant His blessings and choice in the process. The brothers who were nominees, starting with the oldest one (unless a younger person held position of higher authority) draws from the hat, opens it and lays it on the table. The nominees continue pulling a paper out of the hat until one of them draws the paper marked “minister”. He then knows that he is the chosen one.

The Lehrerleut have a different approach to selecting their minister.

The votes are cast and tallied in a meeting after the church service, with no announcement made as to the number of votes that an individual has. The ministers do not vote at home but wait to vote at the Predigorwahl meeting which happens at a later date.

All the male members in good standing with the church, travel to the colony where the minister selection gathering is taking place. There the final nomination process continues. All the ministers who are present vote for the person of their choice. The combination of votes from the mother and daughter colonies plus the votes from all the ministers at the Predigerwahl meeting make up the total vote. It is a very democratic process, one person, one vote. Anyone with 20 or more votes is considered for the final lot.

Just like with the other two groups, a special prayer is held asking God to grant His blessings and choice in the process. Again, the nominated brothers, starting with the oldest one draws from the hat, opens it and lays it on the table. The nominees continue pulling a paper out of the hat until one of them draws the paper marked “Er soll Prediger Sein” or “Er soll Lehrer sein”. He then knows that he is the chosen one.

Men who are elected to the position of minister retain their position for life. Under rare circumstances, such as gross misconduct or incompetence, they may lose their position.