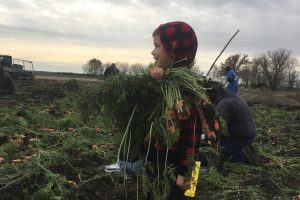 AS LONG AS THE EARTH REMAINS, THERE WILL BE PLANTING AND HARVEST,  COLD AND HEAT, SUMMER AND WINTER, DAY AND NIGHT.” GENESIS 8:22

On a Hutterite colony, typically one couple is in charge of the vegetable garden. They’re the ones who decide what will be planted, when the garden needs weeding or produce is ready to be picked. For these tasks, the women’s work group and sometimes the men and older children will help as well. When it’s a smaller task, like digging a few boxes of carrots for the kitchen, the gardener couple will do it with a few Dienen, young women.

I have many happy memories of helping Josh Vetter and Kate Basel, my aunt and uncle, when they were the gardeners at our colony. One memorable autumn task for me is Fasielen dreschn, harvesting dry beans. We had combines, of course, but unlike today’s gardeners, Josh Vetter preferred the old way.

“Girls, you can start pulling out the bean plants,” Kate Basel announced when we arrived at the garden. “Posts ober auf! Se sein zimblich truckn. Be careful they’re very dry.” The sun-dried, brittle beans sang their crackly harvest song as we worked.

Using pitchforks, we placed the plants on one half of a huge tarp, then pulled the other half on top of the plants, completely covering them. With his little garden tractor, Josh Vetter drove back and forth on the tarp a few times. This broke the pods, so the beans fell out. After that, the tarp was lifted, the plants thrown out and the beans, plus a lot of plant bits and dirt poured into a huge container. “Who needs a combine, when we can thresh like this.” Josh Vetter quipped from his perch on his Farmall A. “Geat’s nit guet?” I agreed with my uncle, it was fun, because it was like stepping back into pioneer days.

Finally, it was time for the wind winnowing process, to separate the beans from the dirt. Kate Basel filled a dipper, held it high over a tub and slowly emptied it. The beans fell into the tub, while the chaff was blown away by the breeze. If there wasn’t any wind that day, a large fan worked just as well.

Much as I enjoyed this process every September, the beans were of no significance to me. I didn’t enjoy eating them and certainly wasn’t aware that there was anything special about the variety we grew back then. I probably didn’t even know that there were numerous varieties. These beans were pale green with a distinct black rim around the eye. The ones we grow now are white and smaller in size. For the most part, we cook the beans and serve them with sausages. Left overs become pork and beans to be served with the fries at supper, or soup the next day.

These bean-memories were reawakened recently when I read an article by Sandra Fisher, titled Living Heirlooms, in the Fayetteville Observer, an online Iowa newspaper that landed in my inbox via my Google Alerts Hutterites setting. The blurb that caught my attention read, “Seeds which have been preserved keep people in touch with their ancestry and help retain history. Imagine a variety of fruit or vegetable that was so important to a family’s history or homeland that they would bring it with them when they immigrated to America. Such is the case with Greek melons, which were introduced in the early 20th century when Greek immigrants settled in Utah, and Hutterite Soup Beans, which came to North America in the 1870s by virtue of Hutterite Christians fleeing persecution in Europe.” 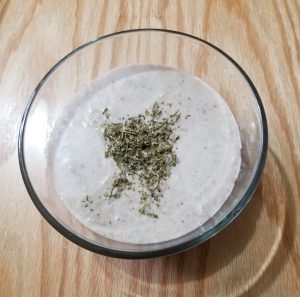 Intrigued, I sent a message to the author. She didn’t know much more than she had in her article, but suggested I contact the Seed Savers Exchange in Iowa. Upon researching via Google, I found a website that boasted: “Hutterite Soup Beans make a soup unlike any other bean.” Other websites described the soup from these beans as “rich, delicious and creamy”, and also have their origin in the bean’s description.

Some, however, express doubt that the bean was brought to America by Hutterites in the 1870’s, since there is evidence of these beans being in North America before that. William Woys Weaver, an internationally known food historian, believes the bean is a Russian variety, known as China Yellow, and that, “The Hutterites could indeed, have brought the bean with them to Canada and the Dakotas”. The original strain was called Lemon Yellow, which “may indicate some crossing with a white variety, sometime in the past, perhaps to improve its quality as a soup bean.”

I asked other Hutterites whether they ever heard of the heirloom beans. Few knew anything about them or had only a vague memory. However, one gardener couple has been growing them for a number of years, after buying a package from the Seed Savers Exchange. They were told that the beans cannot be bought in bulk. Therefore, they save some of their beans every year for seed – for their own use and to share with others. They kindly offered me some. I plan to offer them to our vegetable gardener in the hopes that we’ll start growing Hutterite Soup Beans once again. 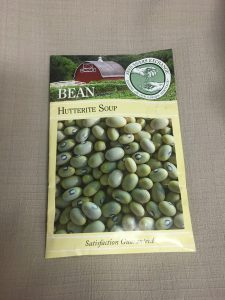 Only this time, I know the story behind them.

As we celebrate Thanksgiving, I’m in awe that a late-nineteenth century Hutterite gardener had the faith and foresight – before crossing the Atlantic on the S. S. Hammonia – to tuck a bag of dry beans into his trunk.

Over a hundred and forty years later, they are featured on national seed catalogue pages as heirloom seeds – registered Hutterite Soup Beans!

Dear Linda Maendel,
I am fascinated with heirloom seeds and I think it is so important that we do not lose original and unaltered seed. I often wonder if, perhaps, genetically we should eat what our ancestors ate for good health.
I have been reading all of the articles on this website this evening and I feel like I arrived home. I was born and raised a Roman Catholic and I love it, but I must say, all of the things that I’ve read on the site are the things I have come to believe on my own. Things that don’t exactly mesh with the Catholic church. I’ve never been able to understand why we aren’t all pacifists. That seems elementary to me if we are going to follow Christ. I have never heard of the Hutterites until this evening and I love you guys!
I will order these seeds from Iowa and I will use the wind blowing the chaff away technique. Thank you!

Oh, my goodness, Linda, Seed Savers Exchange doesn’t seem to have them any longer!

Thanks for reading my post, Ginene and for commenting on it. I sent you an email…perhaps I can put you in touch with someone who can sell you heirloom bean seed.

I am looking for a seed catalogue that your community furnishes. Could you please send one to me please. thank you.

Hi Grace, I’m sorry we don’t have a seed catalogue, but you could try Baker Creek Heirloom Seeds. I believe there are also a few other seed companies online that carry them, just Google ‘Hutterite Soup Beans’.
I hope you don’t mind, I took your address out of your comment before posting it.

I am fairly sure that the bean known as the “Hutterite Soup Bean” if ever grown by Hutterites they had gotten the seed from Native Americans, compare it to the Hidatsa bean and they’re about identical as can be. I have been an heirloom seed collector for over thirty years and if that bean is truly an heirloom from Russia, it’s incredible that no other Germans from Russia have had that bean, especially the Prairieleut.

It has been my observation that in many ways, the Prairieleut have a greater interest in history and heirlooms than the gemeindeshaften. The colony people, perhaps as a result of community of goods, have not been ones to cherish old “things”. This, I have found to be different among the Prairie People. Many of them have heirlooms that they brought over from Russia, and a number of them also preserved seeds though none of them ever have heard of that bean. I did, however, introduce to Seed Savers Exchange a watermelon called “Schlechter” it was very popular among the Prairieleut who brought it from Russia and called it “schlechtergeich.” It’s a small, football sized or a might larger, striped melon with pink flesh and red seeds. LOTS of red seeds. Perhaps that’s what is “schlecht” about it. Anyway, we know it’s of Hutter origin and thirty years ago an elderly colony man told me he remembered when they were grown in the colony as well. He said when they lived in ND it was the only “geich” they could grow. The “vintergeich” is also a melon which your ancestors brought with them from Russia, along with vinepeaches, (I believe Bonhomme still raises them) , and a Russian cucumber. I received seeds for the melon and the cukes from elderly Prairieleut. It is offered through SSE as “Russian pickling cucumber.” So, if you wish to raise something you know your ancestors would have raised for sure, I suggest you try them. The bean is iffy at best. Another authentic watermelon is the one called, “Cream of Saskatchewan” It was brought from Russia as well. Elderly Hutterische Mennonites told me they used to grow that one as well and called it “Sukker melon.” I am glad to hear of your interest in heirlooms at least. I would encourage you to grow the things I mentioned and get in touch with your past. The Hutterites, like everyone else, are losing their touch with the past. Even your language is evolving and I encourage my school students, keep your Hutterische words. You have such a unique language, Don’t lose it. Here’s an example: What do you call corn?