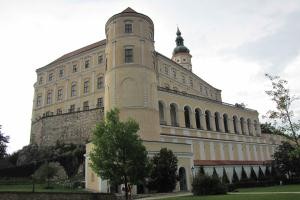 The following blog post is Part 1 of 4 planned posts about a Hutterite history tour I was privileged to experience in the summer of 2012.

Part I will provide an introduction and brief overview of our tour.

Part IV will describe a planned Hutterpark in the city of Innsbruck, Tyrol to celebrate the Anabaptist-Hutterite history in the region.

I received an important looking email from the Goethe Institute one morning in February 2012, as I was preparing to teach a high school Hutterite History class on the HBNI-ITV system[1],. Several months earlier I had applied for a Goethe scholarship to take a course in Germany in order to improve my German teaching skills. Nervously, I opened the email to discover something very exciting: I had received a scholarship and was going to Frankfurt, Germany for two weeks in July! Most Hutterites who study in Germany also take some time to tour the places of our ancestors. The timing of the announcement made it even more special: I was thrilled to announce to my students that I would have the opportunity to visit many of the places we were studying in the course and which are referenced in our Chronicles.

Two of my colleagues, Mark Waldner from Decker Community and Harry Stahl from Odanah community, received a similar scholarship. My wife and my uncle and former German school teacher accompanied me from my community. Before the German language course, the six of us planned a 10-day tour of places related to Hutterite history in Germany, Switzerland, Austria, South Tyrol (Italy), Slovakia, and the Czech Republic. After months of planning and preparation, we were eager to travel!

For the purposes of making my account both manageable and meaningful,  I will first provide a very brief overview of the places we visited and the people we met on our journey.  Then, in the following three posts I will focus on my experiences in Tyrol and South Tyrol (located in Austria and Italy respectively)—the region where Jakob Hutter was born. We spent about half our time there and this part of the tour left the strongest impression on me. For the purposes of a coherent narrative I will relate the places we visited in chronological order according to the history and not the order we visited them. 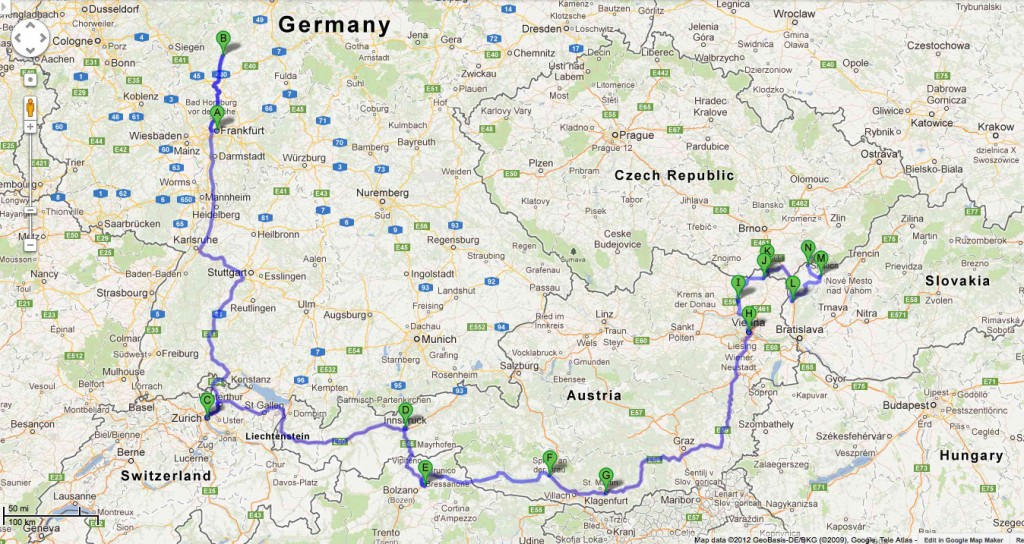 Part I: Overview of our Tour

Anybody who has flown to a foreign land for the first time will understand how happy one is to set foot on solid ground and to be met by a friend or relative at the airport. Such was the feeling my uncle Zack Hofer, my wife Jennifer and myself experienced when we landed in Frankfurt and were greeted by Gary Waltner. Gary lives at Weierhof, a Mennonite settlement in the Pfalz about an hour south of Frankfurt, where he works as a volunteer at the Mennonitische Forschungsstelle.

Because we arrived two days earlier than our colleagues, we had planned to tour some sites near Frankfurt with Gary. Our first stop was the city of Marburg where the margrave Philip of Hesse ruled from his imposing castle atop the city. Peter Riedemann originally addressed his Confession of Faith to Philip to explain the Anabaptist-Hutterite position. Today, Marburg is a bustling university city and the castle has been converted to house university students.

Next, we traveled to Wolkersdorf where Riedemann was imprisoned for several years and where he wrote what would become the Hutterite Confession of Faith in 1542. The original castle-prison has been destroyed and in its place stands an old barn made with bricks from the ruins. The genial owner led us down into the barn’s cellar, where some of the castle’s original walls still stand and where, presumably, Peter Riedemann stayed and wrote his important confessional work. To highlight the historical significance of the site, the community erected a sign bearing the story. 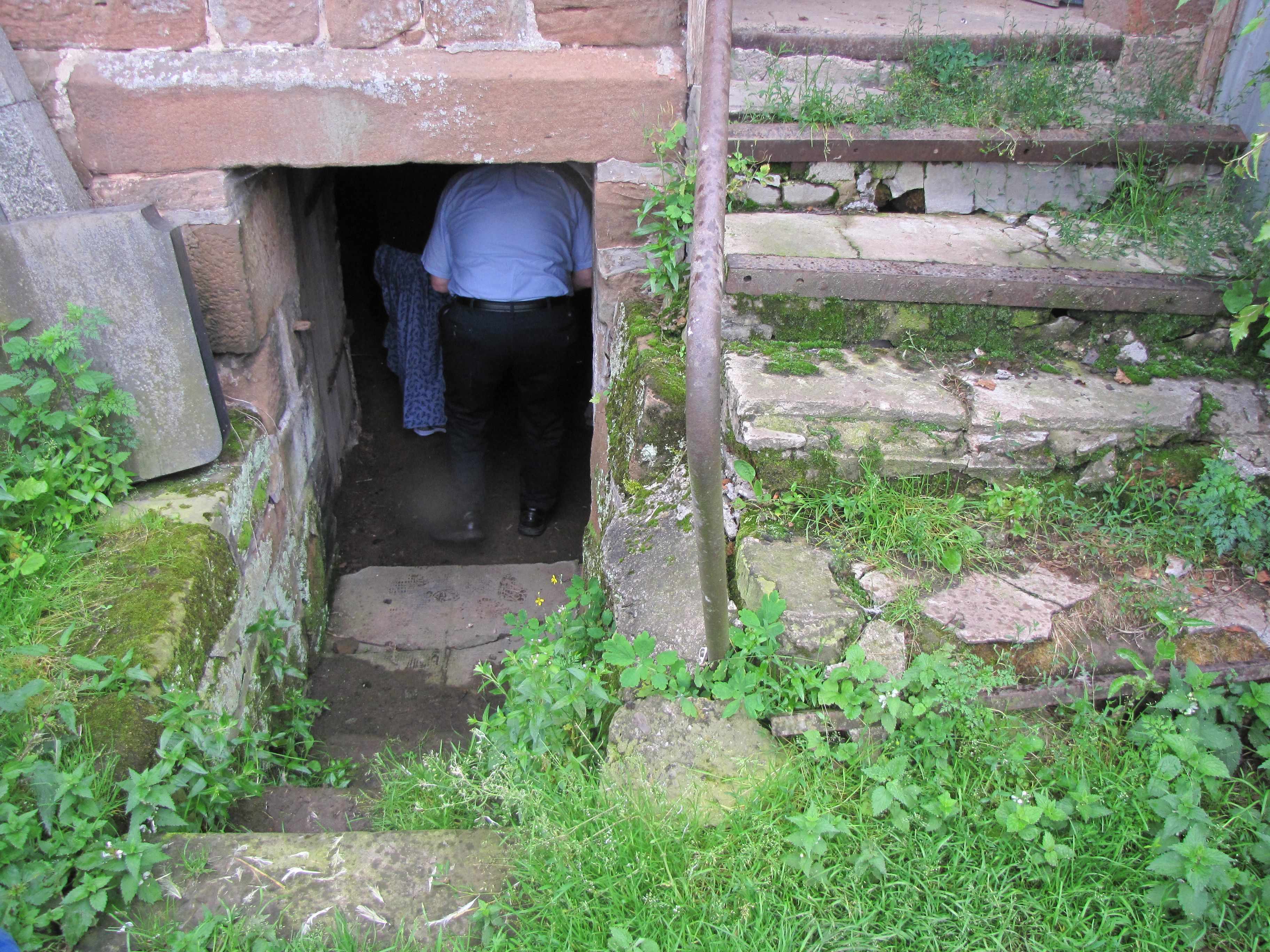 For supper Gary treated us to a variety of grilled meats with bread, cheese, potato salad and a tasty zucchini dish, along with some local wine and beer. The next day, after a hearty breakfast and devotions, we traveled to Worms to visit the cathedral where Martin Luther was brought to trial. Then Gary surprised us with a boat ride on the scenic Rhine River from Bingen to St. Goar, including the world-famous 120-metre tall Loreley Rock! The countless castles and vineyards found along the tall hills on either side of the river explained why the stretch of the Rhine between Koblenz and Bingen was added to the UNESCO World Heritage Sites in 2002. Gary picked us up several miles downstream and we headed to Alzey to see the castle where Leonard Dax was imprisoned. Leonard Dax was a Catholic priest who converted to Anabaptism in 1557. He became one of the ablest Hutterite missioners and apologists of the time. At around 18:00 we returned to a hotel in Frankfurt where we met the other three members who would accompany us on our Hutterite history tour.

On Saturday morning, July 21, our group of six took the train to Zurich, the birthplace of Swiss Anabaptism. One of the original Swiss Anabaptists, George Blaurock, brought the Anabaptist teachings from Zurich to Tyrol. In Zurich, our tour guide Herr Damdach led us through the Grossmünster, the church from which Zwingli famously launched his Reformation in the Swiss territories. In comparison to other churches we saw on our trip, the Grossmünster was plainly adorned in keeping with the Reformed stance against icons and relics; however, the splendid stain glass windows by Sigmar Polke (1941-2010) gave it an air of grandeur all its own. In the church’s sacristy, we saw a Froschauer Bible, which is the version referenced by some of our Lehren.

From the Grossmünster we walked along the Limmat River and paused to read the memorial plaque to Felix Manz who was drowned in the river because of his Anabaptist convictions.

From Zurich we took the train to Innsbruck, Austria. Our journey through the stunning Alps by train was unforgettable! Rugged and treed mountains, turquoise lakes, streams and rivers alongside the tracks—all of it was simply gorgeous! 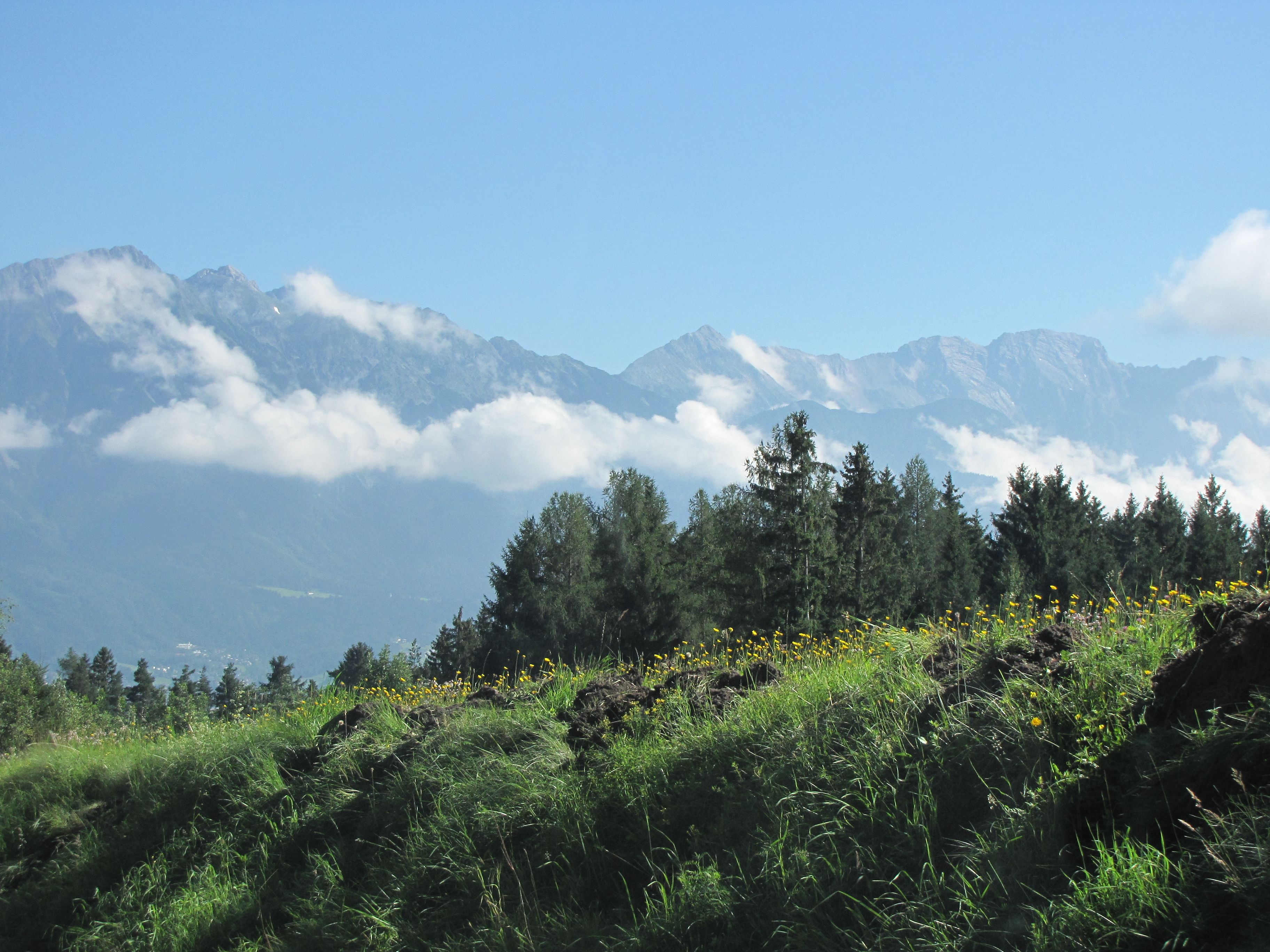 In Innsbruck we met our gracious host families: Eduard and Gertrude Geissler, Max and Margot Eugster and Ignaz and Gotlind Hammerer. The next day, a Sunday, we visited das goldene Dachl in Innsbruck and walked along the Inn River to the site of a proposed Anabaptist memorial park, which I will describe in more detail in the final post. Next, we drove to the village of Rattenberg where we climbed to the Rattenberg Castle where 71 Anabaptists were executed. Near the town of Schwaz we toured a mining museum, Freundsberg Castle, where several Anabaptists were imprisoned.

The next day, Tuesday, July 24, we rented a van and drove to Bruneck in South Tyrol, Italy where Robert and Martha Hochgruber hosted us for two days, showing us many sites related to Jakob Hutter’s story. I will relate the sites we visited in more detail below. In South Tyrol, we also had the opportunity to tour Schloss Taufers and see the Faulturm where Hans Kräl was imprisoned.

On Wednesday morning our trip continued eastward to Spittal an der Drau, where we toured a cultural museum and visited the Hofer, Waldner and Kleinsasser Hofs. We spent the night in Klagenfurt before traveling to Vienna on Thursday.

In Vienna we had a delightful lunch at Alexander Basner’s apartment before traveling to the village of Steinabrunn (formerly a Hutterite settlement), Falkenstein castle and Anabaptist museum and finally Mikulov (formerly Nikolsburg). At Nikolsburg, Hans Hut and Balthaser Hubmaier had a famous debate over the issue of whether Christians could use the sword. 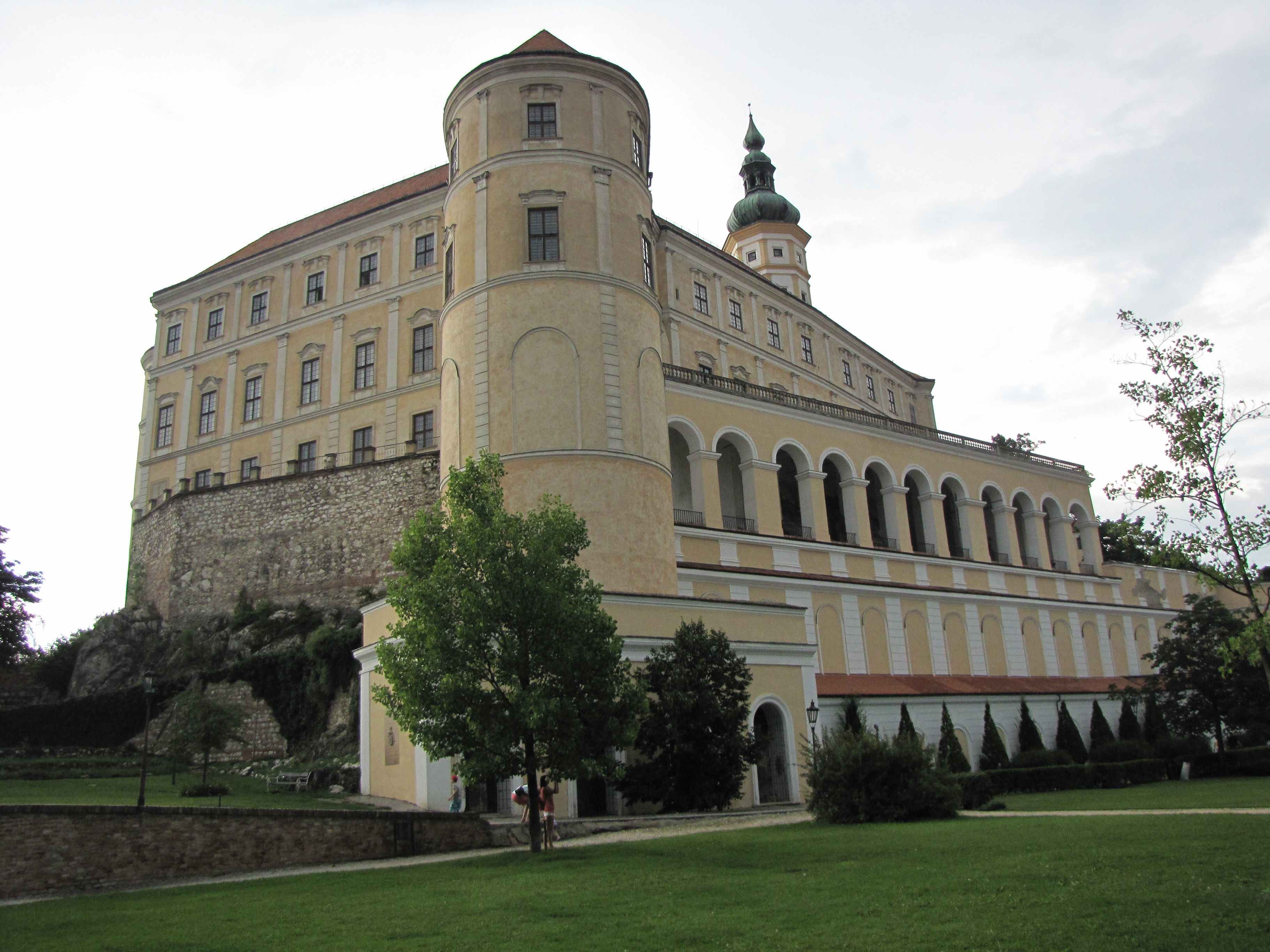 Of course, Nikolsburg is also the birthplace of G’maschoft. The Hutterite Chronicle records that in 1528 Jakob Wiedemann led the pacifist Stäbler out of Nikolsburg and established community of goods at a nearby village. The scale of Leonard von Lichtenstein’s castle at Mikulov was astonishing! I knew he was an important and influential figure but I had no idea he was that wealthy.

The next day, we visited a recently opened village museum at Niedersulz, located about 30 minutes from Vienna. One of the homes in the village was devoted to telling the Anabaptist story in the Weinviertel, Lower Austria. The Anabaptist house has three rooms featuring artifacts and information on the Radical Reformation, with a focus on the Hutterites’ connection to the region.

Next, we went to Veľké Leváre where Martin Hoferka toured us through the formerly Hutterite, and current Habáner village. We saw many examples of the distinctive Habáner architecture.  The Habáner are the Hutterites who were re-catholicized about 1760 under Maria Theresa. Today, they are most famous for their crafts, especially their ceramic traditions.

On our final day of the tour we continued our tour of Habáner villages with Martin Hoferka. First, we went to Sobotište, where we visited a mill built by Hutterites. Then we toured the Zahorske Museum in the town of Skalacia where Martin works. He showed us a hand-written concordance manuscript copied by Hutterites. The most interesting part for me was the room full of ceramics, some of which were in the Habáner style.

Retracing the path of our ancestors, we covered about 1800 kilometers in eight days. Reading the Chronicles of the Hutterian Brethren is much more meaningful now that I can put a “face” to the people and places it refers to. All in all, the tour was everything we could have hoped for. The worst inconvenience we experienced was losing a cell phone, which was eventually recovered.

In the next post, we will turn our attention to the Tyrol to take a closer look at the places and events that are part of Jakob Hutter’s story.

The full article appears in Preservings 32 (2012). Preservings is an annual publication of the D. F. Plett Foundation.

[1] HBNI-ITV is high school programming for Hutterite students via Interactive Television (ITV), delivered through the Hutterian Broadband Network (HBN) and collectively owned and operated by the Schmiedeleut Group 1.

Well done, Jesse. Looking forward to your other articles!

Thank you for sharing, I love our Hutterite history, someday I hope to walk where our ancestors walked, in the meantime, the chronicle and the stories told by the ones who have been there will have to do! looking forward to the next articles

Interesting! I knew there were Mennonite/Amish tours, but didnt know any that focused on the Hutterites. Someone ought to write a book on Hutterite history, briefer than the Chronicles, with accompanying photos. Looking forward to the rest of your story. Mike

No one cares about me and I am tired of trying to live this life without friends
i dont drink i dont use drugs I have no criminal record
I want to live in community anywhere SOMEONE please help me robertillman13@gmail.com

very interesting about where we all came from.

Interred to learn more. Mt great grandpas last name was Hutter but they dropped a T when he arrived from Tyrol Austria. Wonder if I’m a relative.

Hallo,
I am a native Austrian from Innsbruck and just recently learned about Jakob Hutter. After a Google search I came across this site.
Originally I left Austria to find my God, now a born again Christian I find these Historical facts interesting, because all I ever knew about was Catholicism.
I will read your other articles as well.