Jakob Hutter was born on the Pröslhof in Moos in the Pustertal in South Tyrol near the village of St. Lorenzen. Our visit to the hamlet in the Tyrolean Alps was on a breathtakingly peaceful Tuesday morning. The Hof is within site of the Michelsburg, another castle where several Anabaptists were imprisoned. The elderly homeowner had prepared a doughnut-like pastry with fresh berry jam and juice. During our visit, we discovered from an old photograph and caption that Jakob Hutter’s name may not come from his occupation as hat-maker (“Hut” is German for “hat”), but from the name of the Hof where he was born, now called Pröslhof.

It is surmised that as a youth Jakob Hutter attended the church in the village of St. Lorenzen. We visited the church and experienced firsthand some of the images and architecture the young Hutter would have seen.

Jakob Hutter was a hatmaker who apprenticed with his uncle Caspar Huter in Stegen. In 1526 he heard a sermon preached by a goat herdsman Wölfl from the Sarntal. Inspired by what he heard, Hutter bought a New Testament in the town of Bozen and began preaching himself. He was dismissed soon thereafter by his uncle and found his way to Spittal and der Drau, a city in mid-Austria. From there he found his way to Moravia, where he came into contact with the communal groups who sought refuge in the relatively tolerant border region. Between 1531 and 1533, Jakob Hutter travelled between Tyrol and Moravia—a distance of over 600 kilometers!—three times.

Some scholars suggest that Jakob Hutter’s reading of the New Testament and particularly the Sermon on the Mount was shaped by his involvement in the Peasants’ Revolt in Tyrol. The Peasant’s Revolt was an uprising of farmers who were dissatisfied with the widespread economic inequalities and the lifestyle and moral conduct of the clergy in the region. Armed with pitchforks, clubs, knives and any other weapons they could find, and led by Michael Gaismair, the former secretary to the bishop, the discontented farmers stormed the bishop’s residence in Brixen in an attempt to have their voices heard. One can still see the marks left by their weapons on the metal door of the palace.

Door to bishop’s palace at Brixen. The marks were left by the peasants who stormed the bishop’s residence.

The events of the Peasants Revolt were one reason the authorities dealt so earnestly with the Anabaptists. The bloodshed and merciless killing of thousands of peasants by the local authorities may have taught Jakob Hutter firsthand that violence only begets more violence and that in the kingdom of God the way of violence has come to an end. We were reminded that the beliefs we take for granted were forged through sacrifice and intense conflict.

The mountainsides in Tyrol’s Inn valley still bear the traces of an important industry in the region dating back to the middle ages—mining. Apparently many of the miners were early converts to Anabaptism. Miners were the migrant workers of the day and their movements were the means by which the new ideas spread across the mountainous region.[1] Near Brixen in South Tyrol we visited the mining shafts that became a refuge and meeting place for Anabaptists during times of intense persecution.

Overlooking the village of Schwaz near Rattenberg is an old castle, Freundsberg Castle, which has been converted into a mining museum. Between 1528 and 1540 twenty Anabaptists were executed in Schwaz alone. Before their execution, they were imprisoned in the castle. Among the prisoners was the gifted Hans Schlaffer, formerly a Catholic priest, who wrote several letters to the church communities. These letters have survived to the present and have been published as part of a collection of Hutterite epistles. The museum includes a write-up summarizing the Hutterite-Anabaptist history in the region.

From the pathway adjacent to Schloss Freundsberg we could see another remarkable and moving connection to our history: Staner Joch. Staner Joch is a relatively flat section of the mountain above the village of Stans shaped like a yoke. [Photo: Staner Joch] Removed from the prying eyes of the authorities, Staner Joch is the place where Jakob Hutter gathered with the believers for the last time on August 1, 1533, before leaving for Moravia prior to his arrest. In Moravia, Hutter would find a church community deeply divided over the issue of leadership. 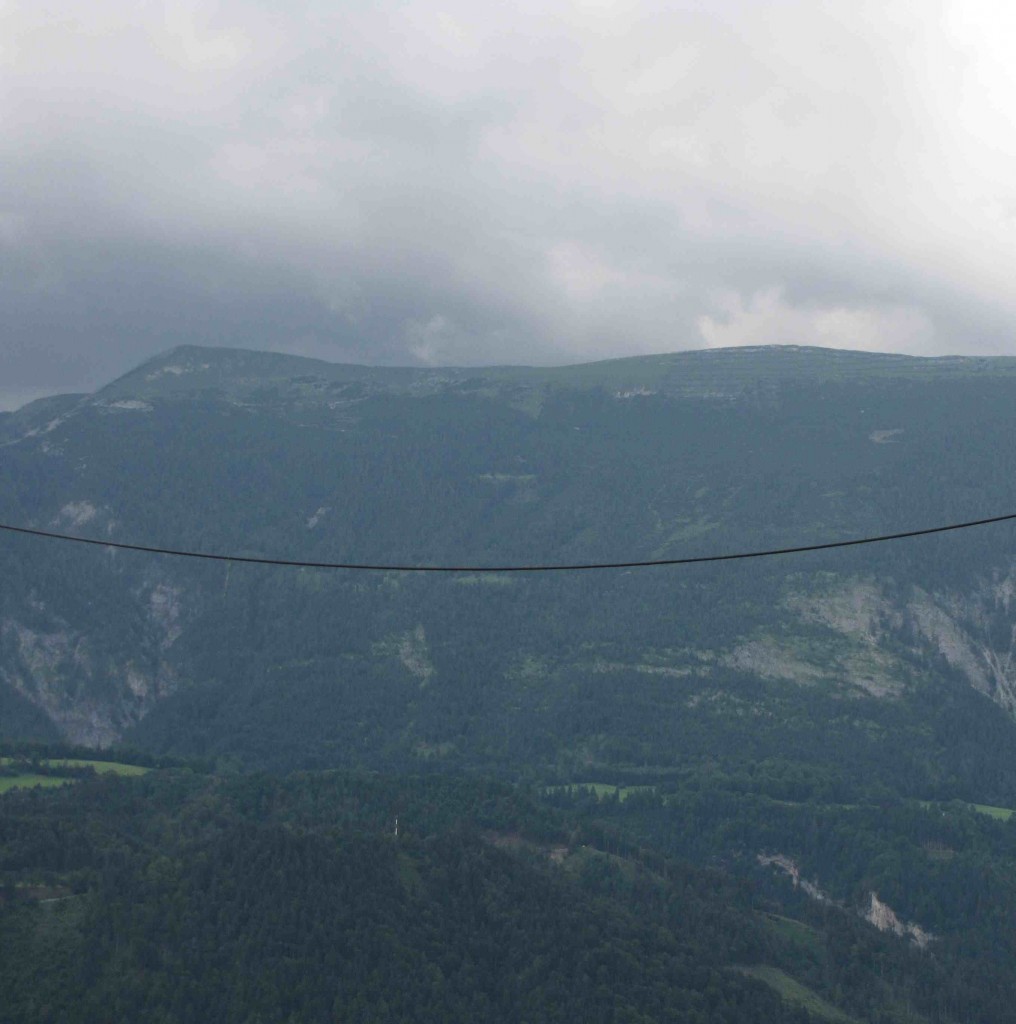 The relatively flat mountaintop, Staner Joch, where Jakob Hutter gathered with the local believers for the final time before his capture and execution.

Standing on the Freundsberg, gazing across to the mountaintop opposite the Inn River, I was deeply moved when I considered what might have happened at Staner Joch. As their leader, Hutter would likely have offered a word of encouragement to his beleaguered flock. He may have shared survival strategies or read from the Bible. Did the believers share a meal, perhaps one final celebration of communion? Did they pray together, the words of the Lord’s Prayer, “Deliver us from evil”? What words and stories were exchanged? Jakob Hutter’s beloved brothers and sisters in the Tyrol would never see him again. When he was forced to leave Moravia in 1535 by the relentless policies of Emperor Ferdinand I, he returned to South Tyrol, where he was also sought as a public enemy.

The next post will explore events and details around Jakob Hutter’s arrest and execution.

[1] Anabaptism generally enjoyed widespread favour among the Tyrolean population and about 5% of the population joined the Anabaptist communities.  The mining areas in North and South Tyrol were especially receptive to the Gospel. (cf. Werner O. Packull, Hutterite Beginnings, The John Hopkins University Press, 1995, page 161)

Very interesting! Our chronicle mentions (in the small print) that there was a warrant for Hutter’s arrest issued, dated March 10, 1532, with the following details, “Jakob Hutter of Welsberg, a person with a black beard, who wears a black woolen military coat, a blue doublet, white trousers, and a black hat,” und der ein hackl am arm tregt, an expression that could be variously understood to mean he had a birthmark on his arm or that he was carrying a hand gun or other weapon. One source specifies:…so ein Puechsen tragen soll…who is said to be carrying a gun”
Which I guess would make sense if he was involved with the peasant revolt, I’ve always wondered about that, you gave more information here than I’ve ever heard before of Jakob Hutter, thanks so much for sharing!
I had never heard before about the caption on the photo of the town that may pertain to his name and not his trade, interesting….

Howdy! I’m at work browsing your blog from my new iphone!
Just wanted to say I love reading through your blog and look forward to all your posts!
Carry on the outstanding work!