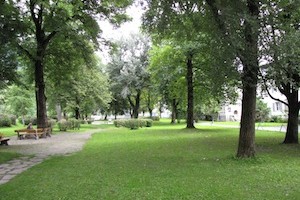 History is rich with irony and in Innsbruck another instance of table turning is unfolding. Since 2005, members of the interdenominational Hutterer Arbeitskreis Tyrol and SüdTyrol[1] have worked tirelessly to create awareness of the Anabaptist history in the region. The witness of the Anabaptists has personally moved each of the group members. In 2007, the Arbeitskreis was inspired to initiate a new relationship between the Hutterites in North America and the Catholic clergy and governments of Tyrol and South Tyrol. Their intent was to begin a dialogue and issue statements of regret about the brutal events of the past. 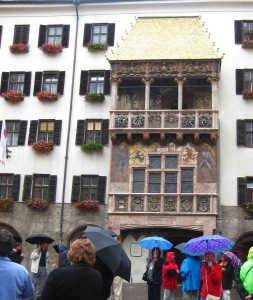 The group’s latest endeavour is an installation called Übrige Brocken, [2] a plan to build a Hutterpark to tell the stories of twelve Anabaptist-Hutterite martyrs from the Tyrol. The Inn River, the namesake of Innsbruck, was the most important route used by Anabaptists fleeing to the relatively tolerant region of Moravia, formerly in northeastern Austria (today, it is the eastern part of the Czech Republic). The park will highlight this historical connection. According to the plan, the park will feature a ring of twelve stones each bearing a word of a verse from Zechariah 9, 16b: “For like the jewels of a crown they shall shine on his land”.[3] Originally from the glaciated mountainside high in the Tyrolean Alps, the stones symbolize both the persecution and dislocation experienced by the Anabaptists in the region.  Accompanying each stone will be a story of an Anabaptist martyr whose witness is especially well documented and inspiring.

The Scriptural text and the circular formation suggesting a crown are fitting for several reasons: first, the witness of the Anabaptist martyrs and faithful believers is a crown of light that continues to shine inspiration to us today; secondly, the crown is a fitting symbol of hope, salvation and ultimate victory for the faithful, even while the Ferdinands of the day rage wildly against them. As Eduard Geissler, one of the members of the Arbeitskreis has eloquently written: “The Anabaptist men and women refused to let persecution, death, torture and harassment hinder them from a life of nonviolent witness and loving fellowship to each other through discipleship to Jesus. From a spiritual perspective, they have become precious stones in the crown of God and they can continue to give light and direction to our land today.”[4]

Ferdinand may have been wearing his royal crown and exercising his royal authority when he ordered the execution of countless Anabaptists in the early part of the 16th century, but God has a way of scattering the proud and exalting the lowly.  The witness of the martyrs may have the final word yet.

The book of Revelations presents a similar irony for the oppressed faithful in the Roman Empire: at present, the Roman Caesar appears to be in control, his might and rule is unquestionable and untouchable. But have faith, the author urges. Caesar will not have the last word. In the end, the suffering Lamb will sit enthroned and the faithful will overcome and triumph.

Once the proposed park is complete, there will be another good reason to return to the land of our fathers to draw strength and light from their witness. Of course it would also be an opportunity to meet our new Tyrolean friends, and again experience their exceptional generosity and hospitality.

[2] The title “Übrige Brocken” (bread crumbs), is significant for several reasons. It is the title of an important early Hutterite publication. The twelve stones featuring the Scripture text and marking the story of each witness are in some ways like crumbs of bread. Finally, the references to breadcrumbs and the number twelve brings to mind Jesus’ miraculous feeding of the five thousand.

We watched the documentary on TV last night in Ireland. We wish you all the best.

Hello I just want to say i saw the show for the first time this Sunday March 11 2013 here in Germany. I really enjoyed it and it made me look up what the Hutterites are all about. I hope I can see a few more of your shows because I find them insperational. It really made me realize how superficial we are in our everyday lives. We think we need all this stuff to be happy when in reality it’s just a burden to have. Thanks for opening up my eyes.

After watching the documentary I understood that the Hutterites believe in a “Christ apart from culture” model of evangelism; however, such separation is not the biblical norm.

I believe that believers need to be “in the world.” Being in the world implies more than just simply inhabiting it. We need to actually be involved in our societies.

Jesus told His disciples to “go therefore and make disciples of all nations” (Matthew 28:19). They were not to set themselves up apart from the world and expect others to come to them to hear truth. They were told to “go.” Similarly, in John 17:15 Jesus prayed regarding His disciples, “I do not ask that you take them out of the world, but that you keep them from the evil one.” His disciples needed to stay in the world, not be removed to heaven. Acts 1:8 and Isaiah 43:10 tell us that we are to be witnesses to the world. Matthew 5:16 tells us that our light is to shine before others to point them to God. Allowing our light to shine requires us to be around people.

To be “not of the world” requires us to be free of worldly influence. This does not mean that we do not participate in government or typical social processes. It means that we do not act as the unsaved world does. We are not slaves to our sinful natures but act in accordance with righteousness (Romans 6:6, 11). We are told to put to death things that are of our sinful natures and to flee from immorality (Colossians 3:5-10; 1 Corinthians 6:18; Galatians 5:16-24; Ephesians 5:3-11).

We “train [ourselves] for godliness” (1 Timothy 4:7); we are “imitators of God” (Ephesians 5:1); we have nothing to do with “unfruitful works of darkness, but instead expose them” (Ephesians 5:11). We submit to authorities and prepare ourselves for good works (Titus 3:1). In essence, we act according to the new nature we have been given rather than the sinful nature of the world (2 Corinthians 5:17, 21; Titus 3:3-8). “We are ambassadors for Christ” (2 Corinthians 5:20), spreading His fragrance (2 Corinthians 2:15-16) through the world.

First Peter 2:9 says, “But you are a chosen race, a royal priesthood, a holy nation, a people for his own possession, that you may proclaim the excellencies of him who called you out of darkness into his marvelous light.” We live in a world of darkness, but we are not part of that darkness. We are not of the world because we are in Christ; we have the light. And while we are still in the world, we are called to be set apart, to shine the light that others might know Him and be saved (Matthew 5:13-16).

Good evening, Jesse. I write from Innsbruck having just discovered your informative blog. Where is Hutterpark? I would love to see it while we (TourMagination Heritage Tour) are in the city.

I’m delighted to see your efforts and those of the committee in acknowledging history and working for reconciliation.

P.S. I teach history and Bible at Hesston College in Kansas.