Culture Shock To Say the Least!! 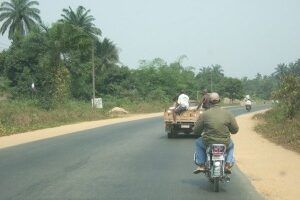 Hi Brian and Leanne
It’s great to see that you are settling in to your new home. We can’t begin to imagine the cultural differences that you will be experiencing. But we pray that in all things, you will lean upon God to find the patients to deal justly with all whom you meet.
Rom 12:12 Rejoicing in hope; patient in tribulation; continuing instant in prayer.

I’m impressed to say the least. Reading both your blogs about all the challeneges so far and your still going strong.of course you are!!! Keep that strenght with you always, and remember even when you feel like giving up or going home someone higher up will always be there to help you through. Seems like the adventure has begun, hoping that God blesses you richly for sacrifcing this time in your life to spread His word. God Bless

PS… Knowing the little i do know about you i know you’ll be able to communicate with the Palm Grove people in no time. I know this cuz its hard to imagaine you “speechless”. God be with you.

Hi Brian,…Lee…all of you,
it’s really great to hear about all of your experiences…the ‘new continents’ the deserts, the moutains, the culture shocks…I hope you have an ‘incredible’ time there. Something you’ll never forget. Not everyone gets that opportunity, and I just wanted to wish you all the best…
Love you all,
Charlotte

Brian; I agree, it’s quit an interesting challenge to try and communicate with them. You will begin to notice how their own language is structured by how they express themselves in English, much like how you can get a idea of how the German language is structured by listening to how we sometimes express ourselves in English. To a person who also speaks German it would make perfect sense, whereas to someone who doesn’t know German our English does sound odd at times. It can be quit amusing 🙂

Count your Blessings Count them one by one, isn’t it Great to See what the Lord has done, Just reading your blog makes us realize more and more how richly Blessed we are, to be living the Rich luxurious lives we live here on this earth every day and take it for granted, We could part with half of what we owe and still be able to make it tru this world living the life of kings compared to palmgrove, Our thoughts and prayers are with you as you strive to bring the word of God to pple in need, God Bless you and keep you safe

I was wondering how i will transport a ladder from here to there next time! Thanks a million! 🙂

Now that’s something I’d love to see…Brian with a deer-in-the-headlights look! 🙂

Hope you don’t have a too difficult time adjusting. And don’t forget to enjoy the coming moments…for that’s what they’ll seem a few years from now.

I see you are enjoying a stifling 90 degrees, feels like 101 with humidity…I note this is about 65 degrees more than we are currently enjoying this fine Monday morning…Whew!. Can’t decide if I want to join you or just wait for July…
Nevertheless, I enjoyed and savored these two posts, I hardly believe you will be intimidated by
those challenges. be of good cheer, you are certainly doing a great service abroad and at home, I entrust you in HIS care.

Brian, thanks for the update it is very nice, you seem to notice things that have never been noticed before. Can you take a picture of the whole palmgrove colony? that would surly be nice! Thanks! May God bless you all!

Hi Brian,
Looks like your adjusting quite nicely! Good to
hear from you guys. Keep up the great work! You
make a great team and we all benefit from it.The
pics look really good. Do try and get some from
the market so we can get an idea what it’s like
and what’s being offered! Is there any fruit available during the dry season? Well I hope God
protects you all and gives you the wisdom to do
things according to His will. Enjoy!