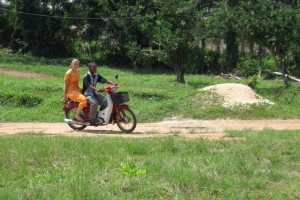 This blog is about motorbikes, since some people commented that they would like to see them. They don’t exactly have souped up Harleys or Vulcans, but they have brand names like Qlink, CarGo and Demark. There are only about 4-5 different bikes, about 150cc. They look alike, have the same Jesus stickers plastered all over them and all smoke blue and are all capable of carrying around 6 people if necessary. Of course they are imported, coming ready to assemble in crates from China. This makes them as cheap as possible and their steel frames bend easily. A new bike costs about $610 USD, and they can run for about half a week on a tank of fuel, which costs about $7 USD. Though this sounds like pocket money, it is a lot if you don’t have it, right?. Then there are the small 90cc mopeds. They are more expensive because their quality is higher and they use even less fuel. I often see women driving these. 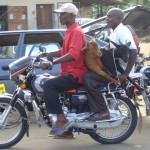 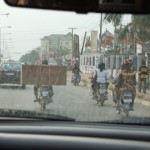 It’s hard to get good pictures of things being transported on a bike because you have to sneak photos whenever you think they aren’t looking. They carry everything on these motorbikes and bicycles, from 15 foot long bamboo on their heads to 6 people on one bike. They can carry crates of glass bottles, stacked up to 3 or 4 high! The one thing which made my eyes open the widest so far was a coffin, a nice new, shiny, fancy coffin strapped onto the back of a bike. If I manage to get a picture of that one, I’ll definitely post it. It’s a straaange sight! Yes, we did wonder if there was anyone inside! 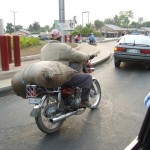 Motorbikes are what the public uses for transport; only a few people can afford a car and the fuel it takes. Here is a common sight; Brian took this picture at a burial ceremony. Motorbikes are like our taxis at home, only you get a bit wetter when it rains! And you are up against these kinds of roads. Some are surprisingly nice, others…well, see for yourself! 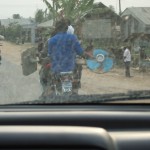 Actually one piece of information we should post is that Inno’s father died in May. He is being embalmed and the burial is set for October. That seems to be relatively soon, since often they wait a longer time to bury people. Inno says if it were up to him, he would have him buried in three days, but he has no say so. The oldest brother and the rest of the family get to decide when the burial will be. Most of his life Inno and his father clashed, not agreeing on religious issues among others. But Inno made a point of trying to stay on the good side of his dad, always going to visit him and trying to placate him as he was often up in the air when Inno disagreed with his viewpoints. The week his father died Inno held the sermon on Sunday and he strongly admonished the congregation that they should always respect and obey their elders. Just because you disagree with them doesn’t mean you can treat them with disrespect. The next notes are from the comments on the bottom of my study bible : “Honour your father and mother is the only law in the Bible that offers a reward here on this earth, that your days may be long!” There is a difference between obeying and honouring. To obey means to do as one is told; to honor means to respect and love. Children are not commanded to disobey God in obeying their parents. Now I can see my mom and dad looking at each other and raising their eyebrows as they read this!

(“Now Saul spoke to Jonathan his son and to all his servants, that they should kill David; but Jonathan, Saul’s son, delighted greatly in David. So Jonathan told David, saying, ” My father Saul seeks to kill you. Therefore please be on your guard until morning, and stay in a secret place and hide.” 1 Sam 19: 1 =3 )

It will be much easier to navigate those washouts on those older roads by motorbike. That one road had some nasty ones.
7 bucks for a tank of Gas that’s a deal! It costs over a thousand to fuel up our 4wd tractor.

I think we should start transporting livestock with motorcycles also with those gas prices. You two keep up the good work God Bless

Great pictures Brian!! I really like the one of the dude holding the two goats! So Lee, you havn’t been temped to take a bike and go ripping around Abak?

Nice wheels! Imagine more ppl using those in America. Just think about all those cycles going down the interstate! You actually see more and more in the road and in town. Is it the warm weather or the fuel prices.
Thanks for the blog! Keep it up!
🙂

What are those bike tires made of anyway. The ones on my bike would be gone if I tryed to carry what those bikes do, and The first picture, the back of the truck, is that all they need for a licence plate? Just a few numbers stenciled on the frame? So, I havnt seen pictures of you two driving a bike or vehicle, do you? or dont you dare?
Loved the pictures, Got a laugh out of most of them anyway. Keep on doing What your doing, and God bless you.

hey lee…your one brave girl…getting up on a bike, with those roads!! drivers!! sth

Hi Lee, Hows the Hydro these days? Almost seams like you cant get your Cell Phone charged, Ive sent you a few messages over the past few days and havent heard from you in a while, are you gettign any lately or arnt you paying you bill? tsk tsk tsk

me and Brian don’t drive the bikes, no. well, not in town. if we like, we get one of the boys to let us drive in the jungle trails a bit. but going to town on a bike is a bit of a hassle, with all that smelly, noisy traffic that passes 2 inches from ur elbow! usually i’m glad to get home again, especiall if i’m holding big bags with eggs or bananas!

far as i know, they do need a real liscence plates, it’s just that the police don’t bother to stop them sometimes, that truck for instance. i think alot of taxi drivers don’t have a license either, like their personal license on paper. since we’ve been here, we’ve been chauffered a lot by one of the guys who doesn’t even have one.

strawberry shortcake…excuse me while i drool a bit on this keyboard….

the hydro, well we’ve had more hydro this july than we had in june. let’s see, maybe we had almost a whole day, put together. hey! things are getting better!! let me tell you we were able to take a real “”shower”” yesterday!!! first one in almost a month!!! O happy day! yup, our water pump was kaput, but yesterday the boys finished putting down the new one, and we ran the gen a couple hours and got some water in the tank! life is good.

oh, we had to take our daily cleansing ritual in the stream. so nice and cool when it’s hot, it’s even nicer and cooler when it’s chilly and rainy! but it seems a body can get used to anything

Hey Leanne, hear you have a birthday today…I suppose the thought never occurred to you that you’d get to spend the day in such an exotic place… Wishing you a blessed, happy day, and better ones to come! 🙂

I’m wondering..why no quads? judging by what they haul with those tinny bikes, a 4-wheeler should be good for a ton or so! 😛
Now imagine a quad hauling TWO fridges…