A Note from Talitha 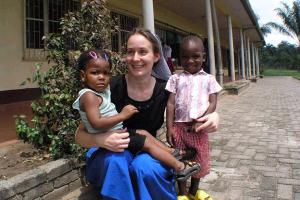 As mentioned in Edward’s report, over the past few years, factions “seitne” have developed here in Palmgrove. Having only been here less than two weeks, we haven’t really felt it, but in small ways we’ve noticed it. Since the first day we arrived, my dad and Paul Vetter have been having meeting after meeting with people, and here and there they have been telling us a snippet or two of what the problems are that people have. We won’t get into that, because a lot of it is just plain gossip. But anyways, it’s been a long hard battle.

We’ve had three brotherhood meetings that lasted till I didn’t know in what position to sit next. At the meetings, we got a pretty good feel of what the ministers have been going through daily. The first meeting was after a hot (no air conditioner and no fans) almost two hour lehr. At first, it seemed like no one had the courage to bring anything up. Inno Vetter made us all sit in a circle on benches. (A short note about the benches, they are very hard and very narrow. When I actually have to sit on them, I’m thankful that Bruce didn’t burn our old ones at home and hope that they will eventually make their way over here.) Because the brotherhood is fairly small, the circle stayed nice and tight.

At the first meeting, Inno had to do most of the talking, simply because no one else would. In church, the Ministers have been trying to impress on the people, that they must rise above fear of each other and fear of the truth. They were putting it into every sermon, every chance they had, and I now understand why. It’s amazing what a difference has been made spiritually here in these two weeks. At first, even when they were asked about a specific topic, they would sit like a bump on a log, not saying a word. Whereas, previously in private, they have had the courage to come out with the truth. At the last two meetings, there were actually some people speaking out, and at the last one people were bringing up issues and resolving them right there. It is emotionally draining to go through. I only had to sit through three meetings and sometimes felt very discouraged and drained afterwards. It made me completely understand, why Paul Vetter and Ed Vetter sometimes just sit there in the evenings, with this immensely tired expression on their face, not saying a single word unless they have to. But anyways, finally we are ready to have the Lord’s Supper and partake of it in peace and unity, with everyone having aired their issues and looking forward to a better future.

Keep up the fight and let God do the healing. and know this, we are all watching and praing.

I thank you for your sincerity and want to encourage you that your experiences are not fall ing on deaf ears. God continue to give you His wisdom and strength for each new task.

If God is for us, who can be againgst us? Keep looking up and God will give strength when needed. What a blessing it is to be able to read your experiences and be able to see just a glimpse of what you are going through. Thank you! Remember, you are In His Grip and He DOES NOT let go. God be with you all.

Hi Talitha
Our thoughts and prayers are with you all. Hardly a day goes by where the children don’t mention one of you and wonder how you are all doing. They all want you to know that they are praying for you. Keep on serving the brothers and sisters of Palmgrove and especially support your father and Paul Vetter. Be strong!

Hi Ta,
Tis nice to hear that there is a difference in those 2 weeks so imagine how it will be in a few months..Wishing you lots of patience and Gods’ guidance as you go on…greetings to all of you…
May God stay near to you all…

Hi Talitha,
Its Interesting to read of all the experience’s u’r all having in the foreign lands 🙂 Thank u for keeping us up to date with all the progress, I know ur all feeling discouraged at times, Just keep on looking up and see the brighter horizon, the Clouds of life may sometimes hide it from veiw, but the sun is bound to shine tru, keep on praying and u will find the way.

I’m really interested to know what a western young sister like you is keeping busy with day to day in Palmgrove? I’ve often thought about going to Palmgrove and kept asking myself what I could contribute.(physically) We’re with you in prayer and support. Stand with the ministers. Greetings…..

talitha……….thanks for taking the time to share with us ….we miss you ….and keep thinking and praying…. glad it’s not me, but still wish it could be…. be care-full!

Hi Thalitha and co’
Thanks a lot for doing this for us, since we know you reading your blog is a fantastic way of keeping in touch! Great to hear your well and things are imporving…..say hi to uncle and auntie….we think of you a lot.

Hi Talitha, Edward and Judith, Paul and Clara, and Lance:
Edward, I and our family here at Netley really enjoy reading the blogs. What a wonderful way of keeping in touch. Ed Vetter, I think that if Edward H could come through the wires to help you he would. He understands the challenges you face. We’d like you to know that our hearts and prayers are with you all as you work to repair Palmgrove physically and spiritually. Be strong in the Lord and be of good courage.

looking at the picture in this day’s blog entry…how is it even possible for a good-hearted soul to do ANYTHING but hope and pray for more breakthroughs to Joy? if you have a flat tire, you can either mutter a bitter word or thank God. no matter which you do, you’ll STILL have to change the tire! it goes a lot easier if you thank God.

Hi Talitha
Keep up the good work.Lokking to hearing from the two of you as soon as you get home.