All About The Birds! 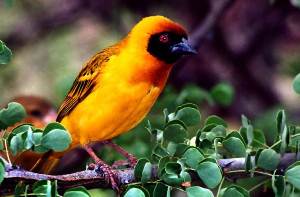 In this part of the world there are many different kinds of birds, that I’ve only always read about at home in books. Many different varieties, most of them colourful and unique are found in the surrounding areas.

The Weaver Bird is famous for the nests that it weaves out of palm tree leaves. The Village Weaver, is a beautiful yellow bird the size of our black bird. The female Weaver almost has the same shape and colour of a sparrow except it has yellow mixed into its plumage. It’s called Weaver Bird because it literally weaves a nest out of palm tree leaves, quite something to see. Whole flocks nest together in big colonies in the palm trees, in fact they even sound like our black birds at autumn time, when they have finished raising their young and are enjoying the last days of summer.

This weaver bird, I think, is called Vitelline Masked Weaver. There are a few varieties around, it’s kind of hard to know the difference at times.

Red ­Vented Malimbe also builds quite an impressive nest. This nest is shaped like a long pair of socks and is closely woven together, quite a talented bird! I wonder who taught it to weave like that? It builds a few nests, but will use only one for laying its eggs. It’s black in colour with a scarlet head and collar. There are a whole flock of them right outside the Palmgrove fence, quite noisy too!

Even the Crow is found in West Africa, this one is called Pied Crow. It looks exactly like our crows back home, except this one has a white breast and a white collar that surrounds the neck. Even with it’s fancy colour, it still only sounds like a crow.

The Senegal Coucal is a very shy bird, usually you see it flying away to hide, unless you are lucky and happen to see it sitting far off and can sneak up on it. Quite an impressive looking bird, with it’s black head and red eyes. It can usually be found on the ground where it hunts for small mammals and insects. When it flies, it has a weak wing beat and when it lands in the thicket it almost topples over. It looks like it’s more adapted for the ground then the trees.

This Pin­tailed Whyday has an incredibly long and beautiful tail. One would think that it gets in the way, especially since it’s usually hopping around on the ground looking for seeds. There are a few living around the Palmgrove school yard. It’s flight pattern is that of our Junco’s back home, which is quite something to see with tail feathers of that size. The female doesn’t have the black colouring or the long tail, but it does have a distinguished reddish bill.

The Superb Sunbird has a really colourful coat with a long curved beak. We weren’t able to find a good picture of it but this one might give you an idea. At first I thought it was a humming bird because of it’s size and flying pattern. It uses it’s long beak to reach into flowers, especially the pumpkin flowers which they grow a lot of around Palmgrove. Egypt, one of the guys, told me that when someone has a dangerous coughing disease, he can catch the bird and cough into it’s long curved beak. After he lets the bird go the person will be healed. Makes for an interesting story anyway, don’t you think?

Senegal Kingfisher, this bird is very hard to miss because of its very shrill voice. When we first got off the plane in Port Harcourt, it was the first bird I saw sitting on top of the building making a lot of noise, they are quite common around here. Interesting enough, the Senegal Kingfisher rarely eats fish but mostly insects, you would think that because of its name it would eat mostly fish.

Malachite Kingfisher, this is another very colourful kingfisher. It’s difficult to know the difference between this one and the Pigmy Kingfisher, but I think the one that I usually see flying around the fishpond is the former one. It has an orangey coloured stomach and bluish back and wings, even the beak has a nice red colour. Here is a picture of what I think is a immature Malachite Kingfisher, it seems to have the right colours. You can see at the corner of the beak that it’s still a bit white and the bill is black, which is the correct colour for the immature bird. I don’t know how they caught this bird, Utu brought it to me to take picture of. I thought that it wouldn’t be able to fly anymore but when we were finished taking pictures he put it on the pole and it flew off.

I almost forgot to mention the Egrets. They are common around here and are found wading in the shallows where they hunt for fish and insects. I had a few pictures of them but I can’t seem to find them again! Too many pictures on this laptop already!

This is just a small list, I could go on and on, but these are a few that I was able to positively identify using a bird book of West Africa that I found in the library. There are many different hawks and eagles which I can’t distinguish one from another. I was sitting at the fish pond one afternoon, when I heard a thud off to the left, there on the ground was a hawk who had just found himself a good meal, maybe a lizard. There are quite a few different types of doves around here too; they can be heard every morning and evening cooing away in the palm trees. Hornbills can also be seen flying around. You know the birds with a huge beaks, they make you think of a rainforest when you see them. I only see them flying overhead, haven’t seen them sitting around up close yet. They have a rather strange shape when they fly, as ungainly as a cormorant, but when they’re sitting, then they seem quite normal.

This time of the year is the rainy season, it’s raining on and off almost every day. They tell me that when the dry season comes then there are even more birds around. They migrate back down from the northern regions. So I imagine that even more colourful speciment will show up at that time.

I thought these birds were something we only read about in books at school. Never for one minute did it actually occur to me that they really exist. Lol.

wow, very nice! almost as if the flowers sprouted wings and flew off. since when is a cormorant ungainly? i’ve always figured they were quite fancy.

i was wondering, when i first saw this blog, if you would actually have a picture of “the birds with a huge beaks, they make you think of a rainforest when you see them”, :D. somehow one always thinks of this bird when the jungle, or, yes, rainforests are in mind. hey, aren’t you suppoes to be able to teach one of those to talk? i think i read or picked that up somewhere!

Wow Lance, You sure put a lot of work into researching all of that. We really appreciate it over here.

oops, well i can’t find anything about talking Toucans (the birds with the huge beaks) on google. Apparently ‘Parrots’ are the birds that can acutally obtain quite an extensive vocabulary. You have any parrots in the vicinity? Can’t we pick you up at the airport, you sporting a colorful, talking parrot on your shoulder? lol, maybe you could even don an eyepatch. This reminds me of the Captian Haddock’s parrot in the Tintin comics, but his vocabulary was rather, um, limited, but still a tad educational!

Parrots aren’t the only birds that are able to talk though. There are a few more species, Macaws, Eclectus and cockatos, for example.

from all the anonymouses said:

Keep truckin’ and never give up. We’re all pulling for you from our most comfortible acres. 😉 We know our best attempts to imagine your daily situations don’t even scratch the surface. Your regular updates sure help. Strangely enough, on this day when paople are supposed to do small favors for you, it turns out opposite; and you write things for us to enjoy reading. The least we can do is let you know we’re with you in thought, with this ‘little’ comment. Doesn’t it make you feel warm and fuzzy inside when you reflect on all the positive impact you’ve made on the Palmgrove people, and even the rest of us back home?

I’m glad you enjoyed this one so much. Sometimes I don’t feel like writing anymore but then I think of everybody who is reading and waiting then I sit down and write something anyway. Also, thanks for the encouragment we sure need it out here, sometimes more then others.

Wow, beautiful! Quite something, I don’t suppose you’re sitting around all day with your binoculars…nah, keep up the good work. We enjoy ‘every’ blog…Thank you

Please do keep up the posts. They are extremely interesting and we really appreciate the time and effort that you’re putting in to get them to us. I’m sure that it’s not easy! What with being on a Nigerian diet and all that warm weather! We can all appreciate how much motivation it takes to get us off our comfortable “air-conditioned” chairs and go do something in the blistering heat. Yet, you have to face this heat every day. I’m not even sure you have air-condition?. Anyway, keep up the excellent work and God bless you!

Thanks for the blog. It was very interesting. Your efforts are not being taken for granted! God Bless.

Keep up the good work Lance. You are bringing Palmgrove “to life” for many of us!