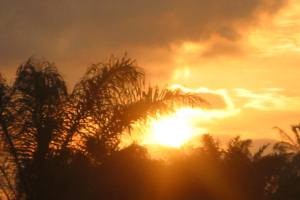 Ok, this is the final post for this adventure. Paul Vetter and I will sit down one last time for a meal of Gari with Afang soup. You’ve been a wonderful audience! Thanks a lot for your comments, they made the blogs come more alive. Hopefully, I’ve been able to give everybody a better picture of what this place is all about. However, reading some of your comments, and emails that I got, I realize that I can never fully explain this place to anybody who hasn’t been in a similar situation. It’s like trying to explain something to these people here about things back home; if you can’t think of anything that they can relate to, then you don’t know where to begin. This brings to mind a saying that I read in a book somewhere, “I can only describe it for you, I can’t communicate it.” Try to imagine coming from an anabaptist background with our strict upbringing and everybody working hard at their occupation, then stepping into the African culture, with its loose way of life and unbelievable ways of doing things.

A lot of the children here are either orphans because the parents don’t have the means to take care of them, or they’re illegitimate children. Many of them grow up without any parents, so how will they ever learn how to live decently?

As far as Palmgrove is concerned, they need people who are strong leaders, without such, I don’t know if it will have much of a chance. Palmgrove has come a long way, but it still needs to go a long way! Especially since Nigeria is a third world country, the corruption is so bad that it makes it hard to get anything done. You keep running from one bad experience into the next; it drives a person up the wall at times! If you go to the internet cafes, you always see people looking up immigrating to the US, or getting US Visas. It looks like many people are looking for greener pastures instead of trying to make a small difference where they are. They think that the western world is a land flowing with milk and honey, which in a sense it is, but it’s not without hard work which is something that they don’t want to believe.
Palmgrove has a few dedicated brothers who are willing to give it all they’ve got, and who are willing to live a life according to the commandments that Jesus left behind for us. It’s sometimes amazing to see how well these brothers handle controversial topics and problems that seem to arise everyday, everyday without relenting. I think I’ve learned more than what I’m going to leave behind, but hopefully the little we are able to contribute will make a difference in the lives of some people. So now that we have reached our journeys end, we can say like in a song, when we climb that last mountain we can truly say, “All in all it has been worth it all when we get home”.

all the anunimus, too said:

…and fade away into the golden setting sun. how fitting 🙂
Isn’t that the mark of a good teacher, to learn as much or more than you teach? If that’s true, then I think we can infer you’re leaving behind a job well done.
“the day you stop learning is a rueful day indeed.”
thank you for the time and effort I imagine it required to keep this going.
yes, auf wiedersehn!

Thank you for taking the time in your busy schedule to post blogs daily on what was going on in Palmgrove.
Up until now Palmgrove was just a place people talked about a lot. I never really knew what struggles and hardships or how much effort was applied by so many people to keep them going…..following Jesus’ footsteps.
May God bless you for all that you have done to make a difference in these people’s lives…which I am very sure you did!
God bless all of you!

yes, the blogs really did make a difference, though you say it is impossible to really know what it’s like unless you’ve been there. now we have some faces and places to put to the names we’ve been hearing up till now. all the effort into these blogs was appreciated! thanks!

🙂 du kohst fei schreim. I think it would be fairly hard for me to not understand the feelings about Africa that you’re trying to communicate to us. We’ve heard so much about it, and I’m sure it’s just a drop in the ocean, but one can really understand all you’ve said. Thanks a lot for all the faithful updating. Du host gu-et ge-toh-eh. See you today…….! 😀

Dear Lance
One quote in your letter struck me.”But its not without hard work which is something they dont want to believe in”
A missionary who has been in Palmgrove once stated that 90% of the income it takes to operate Palmgove comes from the churches in North America. I am not against helping the poor but i ofton wonder if we are creating a situation that gives these people no incentive to work hard to earn their bread.