Bees and Other Topics Of Interest! 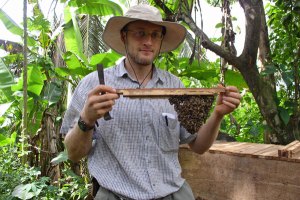 For those of you who might someday travel to countries where malaria is a problem, you could consider taking wormwood, with a few drops of oil of oregano. Back home, they give you so many options to choose from that it’s rather confusing, but that’s what someone recommend to me and that’s all I’ve been using. A few times when I didn’t have all that much energy, the doctor did a blood test and every time he said that the malaria count was low. So it seems to work, for me anyway. What might also help is eating the local food, they use leaves and roots in their food, for which you would pay a pretty penny for back home in a one of those fancy herbal stores.

The African language in this area is rather hard for us to pronounce, let alone understand. For example, there is a difference in meaning if you go up or down in pitch, on the ending of some words. Iba, for example, means the number two, that is IF you go down on the last vowel. However, if you go up, then you’re referring to somebody’s underpants! No wonder they burst into fits of uncontrollable laughter when you try pronouncing it. It’s hard to hear the difference, let alone pronouncing it, if you’re not trained to listen to such differences in speech. There is also no gender difference, as in using him or her when referring to a person. So when they speak English, they often refer to a woman as him or a man as her. You really have to listen carefully when they are talking about a man and a women in the same sentence, because they’ll interchange him and her so often that you don’t know who they’re referring to.

Some of you may wonder about snakes around here. Well, it’s the rainy season and the snakes generally don’t move around as much. I’m told they come around more often during the dry season. I’ve only seen a few small ones, no cobra’s with their flaring heads or boa constrictors. Sorryoo! That means I can’t give you any pictures! Here’s a picture of a boy catching one, which he put inside a bottle. I must say though, that the most dangerous snakes I’ve seen so far were all walking around on two legs.

Oh, here’s one fellow that I have to introduce, the bombardier beetle. For those of you who have heard Dr. Gish speaking on creation science, you will know it quite well. This beetle has a rather elaborate defense mechanism, which consists of a hot flame of gas, which he can direct out his rear end. You can’t actually see any hot flames coming out but you hear an audible pop, and it leaves a small burn on your skin if you get too close. They’re quite common here. I found one running along the floor in my room, every time you threaten it, you can hear the popping sound coming from it.

Just a short note on the African bee. Most everybody thinks they’re dangerous and hard to work with, but in this picture you can see that they are quite ductile at times. Ok, ok, so I’ll admit they are a bit more aggressive then most of our bees. But then again I’ve worked with hives back home that had a worse disposition then these. African bees don’t let you make many mistakes when you work with them. Once they’ve figured out that something isn’t quite right, they pester you relentlessly. This picture for example, was taken just before I accidentally dropped the whole comb of bees. Oh boy! Needless to say, I didn’t have to tell the photographer twice that now might be a good time to leave. The honey is darker then what we are used to from the Canadian prairies, but it’s also hard to find local honey. Or should I say it’s hard to find honey that’s not been altered, something added to make a larger quantity. If you can’t get it directly from a beekeeper that you know and trust, then it’s a good idea not to buy any.

why is the bee frame such a shape? do the bees just form their own combs or what? some of our honey is quite dark, our last batch for example. i wonder if the african honey is even darker.

lol…the language, sounds about like teaching new-comers here our dialect! it can sometimes be quite amusing.

The Bombardier beetle, is that like out bombadier quad here? Must be a scary little creature.
See you in a few days…and don’t forget to bring me some real interesting souvenir…but no strange creatures with hot flames protruding from it’s strange body…

LOL “just before dropping the comb”…I suppose tht would explain the sudden end to the usually abundant pictures.  Do you know what type of snake that is? Interesting post.
see you.

Hi Lance,
As you and all beekeepers should know, we wanted a close-up of the queen. Is the queen dark like the bees? Are they really as mite-resistane as people claim, or is it just a rumour? Do they have any intensive b queen breeding programs going there?
Mir wehn müssen zomkummeh 😀

the language…. i find it amusing that you picked those words to use as an example because irvin was telling me how he ordered ‘two beer’ at a restaurant and was then met with gales of laughter.