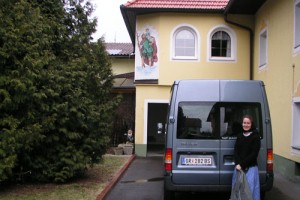 Anstatt sagen hello, sagen die Austrians “Grüsz Gott”. This is just one of the many differences here in this country. From the airport we rented a van and Hugo Pollhammer lead us to his home. He is a farmer and he also has farmland near Brunkild, Manitoba. Silverwinds knows him quite well. He and his son farm both places at the same time, he travels back and forth between the two countries to get the job done. His wife Theresia made a good supper for us. His house is like many of the Bauerhouses here in Austria. That is, four sections connected together to form a square with the center being open ‘zu dem Himmel’. Most of the buildings around here are 400 to 500 years old, anything 100 years old isn’t even worth mentioning.

Hugo Pollhammer told us of an experience that he had lately. I wish I would have recorded it, he told it so well. He said that he had been very sick a year or so ago, and it got so bad that at one point the doctors said that he was clinically dead for close to an hour, then he came back again! We asked him what it was like, and he said it was the most wonderful feeling that he had ever had. The peace that he had felt was indescribable, he didn´t want to come back anymore. Afterwards, this life’s worries, seemed so small and temporary. His time in the hospital gave him lots of time to reflect back on his life and what he had accomplished. After a nice evening he took us to das Gasthouse for the night.

The next day he picked us up at 10 and showed us the general area. First he took us to his farm which also has a nice Bauerhouse on it; this one was very big and most of it was rented out to other people. He showed us his crop where he planted winter wheat, winter barley and also winter canola. That’s the first time I’ve ever seen winter canola, it was all coming up nice and green. Every piece of farm land is so small compared to what we’re used to. He showed us a piece of land, 250 acres, which he bought for 5 million dollars! Here I thought thousand dollars an acre was bad! Right next to his land is a piece of land where the French General Napoleon camped when he destroyed the city of Linz. Seeing all this makes history come alive so much more.

After that we went to the St. Florian Church. This church is a thousand years old and unbelievably beautiful. It has huge marble pillars, huge organs and fancy woodwork. The pictures we took are a joke compared to the real thing. We can better understand what the Chronical is talking about when it talks about the Catholic Church’s misuse of power and money at that time. Pullhammer told us how they used laborers to build the church. They didn’t get any wages, just food to eat. They were told that they were working for the Kingdom of God and that was a reward in itself. In other words, it was basically slave labor that build the churches.

Thanks for sharing your experiences. Much appreciated!! Der friede Gottes sei mit euch!

May God be glorified by your effort and inspire others to follow in your footsteps!! My support and prayers are with you all the way!!!

As the rain and the snow come down from heaven, and do not return to it without watering the earth and making it bud and flourish, so that it yields seed to the sower and bread to the eater,
so is my word that goes out from my mouth: It will not return to me empty, but will accommplish what I desire and achieve the purpose for which I sent it.

Hi brother. Nice to hear you’re having a good time, of course you will, you like all that touring stuff. We missed your voice at the funeral (We miss you already and you’re not even in nigeria yet!!). It was very nice, lots of beautiful singing. Some of those songs have incredibly beautiful, powerful words. Makes you want to look up to heaven with a prayer of thankfulness. And a quite a lot of people showed up. You would’ve enjoyed it. Oh yah, even the guys choir sang! What a treat! We’re still getting used to you not being here, here. Enjoy Austria…

Hi Lance,
Nice to hear you safe thus far. Hope all goes well for you. And yes, since you’re gone…. I’m now the Bienen König!! I guess when you get back I’ll be demoted again. Schade

God be with you as you set out so faithfully to do His work.
May He bring you safely home.