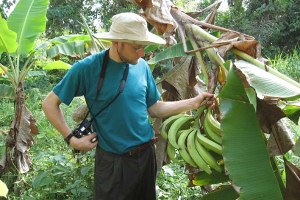 Hi Everybody! We are trying to answer some of your questions from the comments that you leave. We have some blog entries written and ready to go, but getting pictures together for them takes a bit more time. Please don’t be afraid to ask questions so that we can write posts accordingly. I find them very helpful and we can go about getting pictures and information together. I’ve asked a few people specifically what they want to know, it helps me out a lot. If you don’t get your answer, please email me to remind us. Right now, I’m working on a post for the school, but there are so many questions that I can’t answer myself. I still have a lot to learn. Palmgrove school has around a thousand students, thirty of which come from Palmgrove itself. More on this in a later post.

Greetings to all, brothers, sisters and all young people in Palmgrove Christian Community.

The readers digest calls it, —Humor in uniform. Talking about Sunday school. I remember a bright sunny Sunday afternoon. We used to have Sunday school class in that beautiful little building with open walls, aprox = 20 by 16- ft space down by the stream near the fish pond. The partial walls were lined with those simple home made benches. The breeze rustled a few leafs on the green vines and flowers growing on the nearby perimeter fence as I read from, I think it was Exodus 2. When all of a sudden there was a commotion amongst the girls. Fallowing their horrified gaze, the rest of us spotted the reason of their concern. Slowly making its way down the fence and towards us was a large four foot green, snake whose poison is deadly. Quick as lightning this young fellow, Udo Imo, ran towards it with a long stick in hand ready to attack not only snack, but any other foe that could do us harm. Now what was really very funny was the way he changed course so suddenly, in just a split second, when the snake decided to take up the challenge. Running in the opposite direction, his traditional Nigerian chiefs suit just a flappen. We laughed so hard we even momentarily forgot about poor little Moses in the bulrushes.

Now for points to ponder. on a more serious level. We used to have at least 20 young people in the older choir, and 20 or more in the younger coir. At first we hired a choir master from outside then one from our own young people, Eman David took over. We had the best, best choir in Akwa Ibom state of Nigeria. You could sing so beautifully, and the way you dressed up for choir was also impressive. We were even invited to a state competition in the capitol city of Uyo.
It really hurt to see only 8 people in the palmgrove choir on the latest blog. And to hear about the Christian rock music and rock bands. Come now dear parents and young people. Especially young people. The future of palmgrove lies in your hands. You are the foundation of the church. Christian Rock? What does the bible say? 2Co 6
14 Do not be unequally yoked together with unbelievers. For what fellowship has righteousness with lawlessness? And what communion has light with darkness?
15 And what accord has Christ with Belial? Or what part has a believer with an unbeliever?
16 And what agreement has the temple of God with idols? For you are the temple of the living God. As God has said: “I will dwell in them And walk among them. I will be their God, And they shall be My people.” Go back to your first love.

Hi Lance, seems like despite all the differences in our communities here and the one over there, there are still the same problems and issues. Whether black or white, we each need daily encouragment and daily reminders to stay on the Path.

Keep up the interesting blogs. You do answer alot of questions people have about Nigeria.

Oh, your first picture on this blog, the bananas…..they grow “upside down,” don’t they? As in the stem is on the bottom. On the picture it just looks the opposite!

Thanks for reminding us of the importance of giving God the glory and honor He deserves. Being “unlustig” about choir practise is not only a problem in Nigeria, but also in Silver at times. Reminders like the one you shared above are much needed and appreciated! God bless!!

Hi Lance, we really appreate the blogs you have for us..makes us feel so much closer to you..keep up the good work and stay healthy

Hi Lance and everybody else.
Keep up the good work and the outstanding posivite attitude you are showing in the mission fields abroad. Keep up the good work of educating the unlearned.
And they that be wise shall shine as the brightness of the firament; and they that turn many to righteousness as the stars forever and ever. Dan 12:3
Keep on shining!

Thanks everybody for your comments. Leanne, we’ll get a blog done one of these days on ‘fruits of the land’ Hopefully we can answer a lot of your questions in that area too.