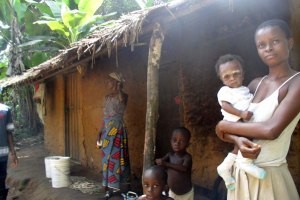 The contrast between the people living in the jungle and people living in the richer part of the cities is startling at times. After going through a rich part of the town and then going into the jungle to look at the mud huts, is like visiting another planet. I’ve had a few opportunities to visit people living in the mud huts but taking the camera along is not always easy. They don’t like it when you just take pictures and usually you’re expected to pay a bit of something, especially since you’re a white man.
As you can see in this picture, the main structure is made of bamboo and everything is covered with mud, which is then baked hard under the hot African sun. After a few years, the mud stars fell off and the termites have a wonderful meal on the bamboo. In this picture you can see the mud falling off the outside walls already. The thatched roofs are woven out of palm tree branches. The more modern ones might have a tin roof instead of a thatched one. The better ones like this one have cement bricks instead of mud for walls. The mud huts are rectangular shaped. I’m told that if you go further up into northern Nigeria you see the round ones, like you would see in a National Geographic magazine. Here we have a small pen made for keeping a few scrawny goats.
The washing is done outside in the stream, which is also used for swimming and drinking water. It’s a common sight to see the children swimming naked and scrubbing away at their laundry, as you follow the winding river through the jungle. The clothes are strung out between bamboo poles to dry, and that takes a while in the wet season since the humidity is usually sitting around 90%. Quite often you see some children with their belly buttons protruding. I don’t know what kind of medical condition that is, maybe someone could inform us, but it’s not an uncommon sight. Since poverty is so prevalent you see many people with unusually deformities. Sometimes it’s from an accident, from which they never had the money to get it fixed so it just healed that way, or sometimes they were born that way. I don’t know what happened to the leg of this woman to make it so twisted! Sometimes in the city you see deformities that are shocking to look at! It does make you appreciate our well established medical system back home.

Hello Lance! !t’s sure nice to see your face on the pictures. I wish you all the best to continue to work along with them, we can see they came along way with your help. May God bless you and lead you so you can teach them lots more .

Lance
I think i can give you some information about the “protruding belly buttons”. Its called umbilical herniation. This is caused by failure of the muscular ring around the navel to close compleatly or because a baby may have a weak umbilical scar. Umbilical hernias are common in babies with low birth weight and premature birth.The childs intestine is actually pushing its way out through the belly button. This condition it easily treatable and can be potentially dangerous. The bowel can become twisted and the blood supply interrupted. This condition is common in third world countries and the reason you see so many is simply because the “mud hut” people cant afford the surgery.

These umbilical hernias are very, very common in black people. Most of the time they are completely harmless (but unsightly), but if it gets painful, it could mean the blood supply is cut off and emergency surgery is needed.

Mud huts can be sturdy if you add manure and straw to make them stronger. They actually are better in hot countries than cement. The problem is that the people don’t have the money for a good foundation or plaster (such as lime plaster) to cover the mud. Plus you need a really long roof overhang.

i’ve heard that the people are actually proud of those “belly buttons,” crazy as it may sound to us, and they are quite vain with them!

Yeah, human pride usually is crazy. Only we don’t realize it in our own cases. Thats too bad because pride causes tremendous damage.

I was reading some comments about a photo that was posted in which a young African boy had a large belly button. My husband is from Nigeria, a place where those types of belly buttons are common and often envied and deemed beautiful. They are perfectly healthy and not dangerous at all, in most cases. I took offense to the comment about human pride causing danger. I find it very humbling that people whom we consider to have “Defects” can be proud of themselves and their bodies whatever people might say about them. If only we in the West could be so accepting of our own bodies and thankful for our health regardless of cosmetic abnormalities.