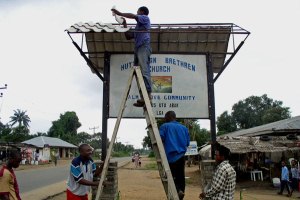 A few months ago, some of the guys started working on a sign for the community, to be put up at the junction. The old one had been torn down a few years before by vandals. I thought that they would never finish before we leave, but surprise, surprise a few weeks ago they finished it and put it up. They used roofing tiles as a roof, looks pretty good too might add! One of the gate watchmen is an artist, so he did the paint work, and the guys did the welding. Then they hauled it out to the junction and put it into the existing cement posts. They put the cement roofing tiles up when everything was finished. Now we still have to make some tiles for the very top. We haven’t gotten around to repairing the molds for that particular style. Just to clarify what we mean with junction, it’s about ½ kilometer from Palmgrove, that is where the paved highway starts. There is a small village there with stores, business and such. Like this restaurant for example. Yes, this is a restaurant! You can buy chicken, roasted plantain and even yam there. Also this blacksmith shop, quite typical, right outside in the open air, with a bit of a lean-to to work under if it rains. Note the generator in the background, almost every business place has a generator of some kind, it’s a very typical. Actually if you look at the picture closely, you can see at the person’s feet part of a smaller generator. I think the bigger one in the background may not even be in operation, unless he only uses the bigger one when he’s welding, I’m not sure.

We’ve also been trying to get more wiring done in the houses and putting up fans in some of the rooms. It’s a good opportunity to teach the guys how to do some wiring. The problem is, we don’t know where to start or when to stop. We finish rewiring one plug in, then we find five more that also need repairing. It would be half the work just to do it myself, instead of teaching somebody else how to do it. Especially since there is always the language barrier, you’re not always sure if they understand what you’re explaining or not. I remembered that one comment in the electrical blog, about keeping one hand in your pocket when working with live wires, so I explained it to them, I think they got the idea.

When Edward, Judy and Talitha were still here, we moved all the carpenter equipment to the yammalina plant, so that we would have a nice place for working with wood. We have a radial saw, table saw and a sizer. The only thing that I can’t get to work is the sizer. it needs some shims to get the rollers lined up properly and I haven’t gotten around to do it. I’m not quite sure how to go about it either! The young boys are taking every opportunity to work there when power is on. They have made some small Nigerian style stools and also a bird cage, quite the imagination at times! They caught some swallows for the bird cage but I think they got away again after a two days. Keeping the blades sharp on those machines is a problem; I put all the hardwood away and told them to use only softwood. They can’t work properly with the hard stuff anyway. In Nigeria there is no such thing as a blade with carbide tips, so they go dull even faster. I found an old one, with carbide tips on it and give it to somebody to sharpen. They didn’t know what to do with it, so they filed the tips off completely and sharpened what was left the way they’re used to. It works, but the blade doesn’t stay sharp all that long.

Oh, before I forget! You have to see a picture of this grapefruit, I’ve never seen one this big. Most of it is the outside skin but the meat inside is still quite big. I thought that it wouldn’t have much taste because we had some before that tasted like cardboard, but this one was really juicy. -Lance

Wow! That’s a monster of a grapefruit. And, it’s not genetically modiefied…is it?
The signs pretty nice, good for them. I won’t ask how long it’s been on the go. Well…we’ll see you next week then….God willing.

Umm I hate to break this to you but (believe it or not) the sign has a spelling error. Isn’t it supposed to be “Hutterian Brethren Church” Hutterian is spelled “Huttherian” on the sign. Might not be a big deal, but thought I would tell you!

As for the grapefruit, I have seen one that big. We had someone come here from China once and he brought my mom such a grapefruit. The one in your picture appears to be the same grapefruit as the one he brought us. 🙂 And boy was it ever good!

God bless you all!

Too bad for the spelling error! Wonder if they would actually bother to change it, especially since Lance mentioned that they’ve been working on the sign since he got there. I looked at the pics earlier and I didn’t notice it either until it was pointed out. 🙂 ‘Dos zu shoed!’

Thank you for the blogs said:

spelling mistakes!?? what are dos?? ha ha, spelling errors are common AND deliberate in Canada, etc, where everyone is an ‘educated fool.’ (to the “”anonymous”” people who will write and tell me they’re offended by the use of that saying, “I did’t make it up! it’s a cliche!”) try checking cereal boxes and signs in the city nearest you, viola! deliberate! the sign boo-boo won’t bother Lance, he’ll just feel right at home!

speaking of, less than a week to go Lance! how do you decide what to leave there and what to bring home? should we send you a list of stuff we’d like? 😀 make it goood! (

*less than a week to go Lance! how do you decide what to leave there and what to bring home?

Does that mean he’s going back?

Lol, ops.. did you say spelling mistake, oh well such it is. I never even noticed, but then again my spelling isn’t all that good. Leanne I’m bringing myself home what more do you want 🙂