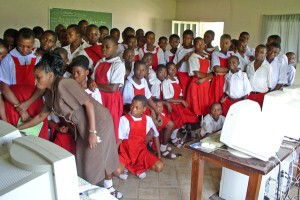 The computer lab, or so they call it, here in Palmgrove, contains five working computers. When I turned them on the first time, only four of them worked. With a bit of work, I’ve got at least one more of them to work. They are Pentium ones running Windows 98, which is good enough to learn to type and run Microsoft Office. There are at least eight, 486’s kicking around that I just can’t seem to get back to life. If I could get them up and running then I’d at least be able to use them in teaching typing. We got three computer technicians out from Uyo to take a look. They came on Sunday for church service, then afterwards we went over to take a look at the computers. They were able to help us out a bit and give me some useful advice.
I’ve finally gotten some of the children typing and they are making surprisingly good progress. In the evening at 7, when the generator starts up, they can type for 2 hours until the generator is turned off.
The teachers, who teach computer science in Palmgrove school, do it all from a blackboard. Up till now, they didn’t have any computers to demonstrate with. Now that five of them are working, they can go over to the computer lab and show the students how they actually work. But how can you teach fifty pupils with five computers? I suppose they do the best they can, a poor education is better then none at all. I still wonder if it’s worth doing with such a huge student to teacher ratio! I think a few BUHEP students should get a chance to experience this first hand, it’s very different to actually experience it, rather then just hearing about it.
The sermon last Sunday was encouraging and challenging. It was taken from Matthew 13:44, “The Kingdom of God is like a treasure”. Like the man in the parable who sold everything that he had, in order to buy a field where a great treasure was hidden, we must do the same. That treasure is Jesus, we must be willing to give up everything we have in order to obtain Him. The ministers emphasized how our standards should be so different from the world, that we should stand out clearly, and not to similiarise ourselves to the extent that people find it hard to know the difference between a Christian and a non-Christian. Everything from modesty in dress and our moral values should stand our clearly. It is a message that the people in Palmgrove need, even a lot of our communities back home. The sermon went on to say that the way to obtain that treasure in the field, is to be born again. We must invite Jesus into our hearts and live according to his word.
– Lance

A question…why teach typing? Will they have access to computers after they are done with school? Do they use computers anywhere’s on the community…for anything? Or is this merely to broaden their horizon?

Are those ‘fifty pupils’ all living in Palmgrove? Could we get some more information about the schooling? You mentioned earlier that they have around 5 young people taking college courses elsewhere, are those members of palmgrove? At the time you also reported that Palmgrove had zero income, so who pays their courses?
What is being done in Palmgrove to create a sustainable flow of income? Could we get more information about those areas?
This blog is awesome; it is just wonderful to hear from you all. Thank-you.

Hello Lance and Others

I can only imagine what it’s like to teach 50 students, here I teach 10 in the largest class, (which is mixed, are the 50 in one grade or mixed?) and I find it awfully challanging.

It’s great to hear about the education side of things…keep the comments coming.

I think I can answer the question about typing lessons. We cannot assume that these pupils will never use typing skills once they leave school. How could we possibly know the importance of computers in Palmgrove over the next 40-50 years? It is indeed a way of broadening their horizons – all races and all people must broaden their horizons if they hope to survive in an ever-changing world.

Hi Talitha, nice to hear that you’re enjoying your little schooling..I bet that is a bit more challanging with 50 students..i can’t imagine..but good for you, keep up the good work..and hope all is well with you guys .. May God keep his protecting hand upon all of you..