Since their Anabaptist beginnings in sixteenth century Europe, Hutterites have practised a modest, simple and uniform dress code. The early traditional style originates from the German and Austrian national costume: black Lederhosen and suspenders for men and boys; the Dirndl, a sleeveless dress with a blouse and an apron for women and girls. Over the years, Hutterites have modified these to make them more serviceable and comfortable. In addition to its value as a cultural tradition, this outward symbol of unity and modesty is an integral part of their faith life, identifying and reminding them who they are as a people, in the spirit of the Old Testament Jewish tradition described in Numbers 15:40. 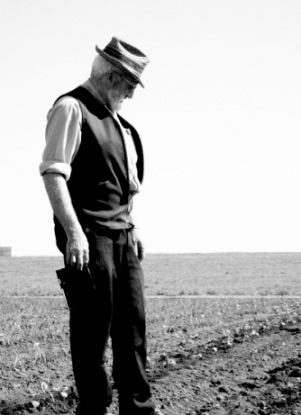 There are three distinct groups of Hutterites: Dariusleut, Lehrerleut and Schmiedenleut, each adhering to its own variations of this dress code. Similarities among the groups include blouses and ankle-length dresses, along with a Tiechl, head kerchief for women; dark trousers and suspenders for men. Both men and women usually wear dark jackets/coats. Children, for the most part wear lighter colours than adults, and in all three groups, young girls wear a head covering known as a Mitz, cap or bonnet.

Dariusleut: Men’s jackets are collarless and Dariusleut men are more prone to wear a hat. The women’s two-piece dress with elbow-length sleeves is relatively dark, and they wear an apron of the same fabric as the dress. Their Tiechl is black with tiny white dots. Boys wear a black homemade cap, a Katuss.

Lehrerleut: Men are dressed similar to the Dariusleut. Women’s sleeveless dresses are somewhat lighter with an even lighter, usually plaid apron. The huge polka dots of their stiffly starched Tiechl, makes it appear almost white.

Schmiedenleut: The major difference between the men of this group and the other two is that they wear many types of mostly dark- coloured casual jackets. Men’s suit jackets are similar to that of any non-Hutterite suit jackets, and in most cases homemade. Women wear either a two-piece or one-piece dress, according to preference. The Tiechl is mostly plain black. In some colonies women wear a sheer black apron to church services, though, most have eliminated it.

Of importance is that particular dress styles are cultural traditions, and for Hutterites, the goal is modest, simple clothing in uniform style, according to each Leut’s Church ordinances. Dressing differently from mainstream society is as much a part of Hutterianism as living communally – fostering a sense of belonging to a much larger whole – in spirit of the New Testament teaching, that exhorts believers to strive for the “inner beauty” that produces a wealth of good works. 1 Peter 3:1. This is a testimony that not only benefits others, but pleases and honours God.