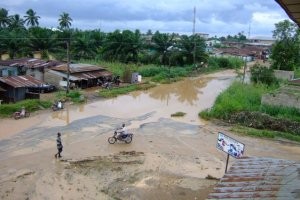 I recall sitting in the Crystal Spring Shop snack room, drinking a cup of espresso and asking people like Mathew Bear for advice on going to Africa. He said “just make sure that the spare tire on your vehicle is good!” Even though that is true for anywhere in the world it is particularly true for Nigeria. The roads are very rough at times or just washed away. On top of all that people don’t worry about dropping nails or pieces of steel anywhere on a road. There can always be sharp stones or shrapnel at any time. Sometimes the road is so flooded that there is no road at all. 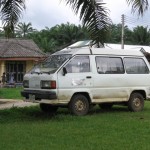 As it turns out the vehicle we call the “bus” doesn’t have a spare tire. The Bus is used to get a lot of the colony’s stuff and supplies. One of the tires has a bad rip and so the spare was used as the main tire. This has had Inemesit and me driving a few miles on a soft tire in search of a compressor to blow it up again. Others have had flat tires and we had to get them fixed in some local shop, which isn’t that bad if you are near a place that patches tires. In one instance the person driving the vehicle didn’t have any money to fix the tire so he came home on a motorcycle taxi. He didn’t return the same day because it was dark and a fair distance from home. By the time he got back to the vehicle the next day, the wipers on the vehicle were missing. This has happened again since, but as there were no more wipers to steal, so nothing was stolen. It also helped that the vehicle was fixed the same day or something else would have been gone. We’ve had many flat tires and soft tires with this vehicle because the tire treads are worn to the point where anything can puncture the tires. In fact some of the tires have no thread at all. So as you can see a spare tire and a good jack is very important, like Mathew was saying.

I always find it amazing through what rough roads that old bus can drive through. I’ve been down some pretty nasty roads and through puddles where I expected the water to come through the floor boards. We have carried twelve foot long boards from the local timber market with the back hatch open. Sometimes the boards scratch the road because the road is so bumpy. The bus carries every thing from palm fruit to people. Besides tire issues the bus has also had some battery problems. I’ve see the batteries removed three times in one day because somebody needed a battery somewhere else. In the end it does just fine as long as the wheels keep turning. 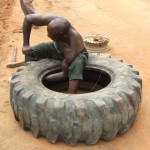 Another interesting thing about tires is tire stitching. At one time I was asked to go to the grader and help fix the front tire. Now I don’t know a lot about changing tires on big equipment. But I know that hitting a tire rim for one whole hour to get the rim apart means that there’s something wrong. As it turns out the rim was rusted together, but after much frustration and sweat from all six of the people involved, it finally came apart. After that the job seemed to go back to normal. The vulcanizer got out his long needle and tread and started to stitch the thick rubber back together. It didn’t take him long to get the job done. Of course the tire isn’t tubeless any more and so the old tube is used as a protector for the new one. In this ways the new tube doesn’t rub against the stitches. In the end the stitches held nicely, but one could see it was only a matter of time before the fix would fail. 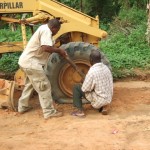 In fact it did fail. Almost two weeks later they were back at the same tire, fixing it in the same way on the same place. A week after that, they did it again. The last time I saw the tire, they had given up and just left the slash the way it was from the start. Now the construction team is talking of buying a new tire, but of course the money is always a problem so they try to manage with what they have.

It seem it doesn’t matter what problems you are faced with. There will always be problems. It is how you deal with them that matters in the end even though it’s just a flat tire.

Hi brian, wonder if your Dad knew of your hidden talent? You can expect a new career when you get home. Probably head of Crystal Spring Publishing {chuckle}. Imagine the used tires we burn sometimes back home. They would be good for a year or maybe more in Nigeria.

Bline, {for Brian in Nigeria} you got me curious, what are you building with the lumber you hauled or draged home from lumber mart?

Greet all from us at Cascade.

Brian… that is one wise brother I have….sth