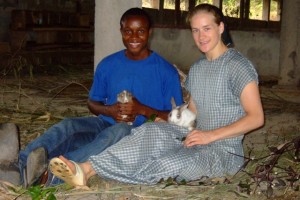 Ok, last Friday, April 4th, we finally made it to Uyo to email…wow, it was great reading, almost a month’s worth of emails at one go! Sorry if I didn’t reply to them all, but I loved every one…;don’t let my not replying discourage you…It’s hard to email all the blog stuff to Lance; it takes a long time with reading emails and checking The Bridge. That takes about 3 hours. So I like to write my emails at home, put them on my thumbdrive and take them to town to mail. So, patience, my friends! And thanks again. Time would sure be longer without all the support and encouragement I get, especially regarding the comments…the more the merrier! I would like to write this blog based on questions asked in the comments after each blog. I’ll try anyhow, so it will be mixed up stuff: Hopefully not too confusing! Here goes: About the Liberia blog: I’m thinking Anonymous #2 mixed up it’s numbers when he/ she said that 85% of Liberians are unemployed, while 28% of Nigerians are unemployed…. I do believe that it should be % Nigerians are unemployed, believe me. Brian says that 28% unemployment would be what we have in some parts of Canada. Also, another commenter wanted information about supporting a child with a monthly fee. And then Nelda wanted to know about special prayer requests. Well, first thing that comes to my mind is Wisdom. We need it so much here, to know how to deal with complicated, confusing and sometimes disturbing situations, and how to deal with each situation fairly and in a Godly manner. Patience is also very much required; it is very easy to get impatient with the silly and deliberately, so it seems, difficult jungle people! 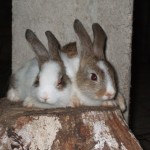 About the bunny blog: Michelle you said that people figure I’ll have a high population in no time? I laughed when I read that!! I truly hope so and I can only cross my fingers. It seems ill-luck runs its course when dealing with animals, I’ve had to inject all of them already! The big rabbit that was here was sick; mange, the vet said. And so he injected all four. That wasn’t in-expensive…especially if it’s money you don’t have. I’ll try my best to get a soaring population going. Another commenter asked what we raise them for, for food; is it a delicacy? Yes, we are raising them for food; they can use them in stew, soup, etc. We white people figured “what’s easier to raise than a rabbit? They raise themselves and we’ll have tons in no time.” But when Lance was here, they tried it too, and when we came, they only had two left, and one died shortly! No, they don’t raise them for pets. I don’t know if they know what a pet is. They are so rough with their animals I just shake my head; they kick, yell and chase their goats, dogs, pigs, turkeys, ducks, anything, just for the sake of doing it. I’ve told the kids and the chicken buem who help me in the bunny barn that if I ever catch them mistreating “my” animals, they will not come in again. I’ve tried explaining to them that if an animal is mistreated, abused and afraid, it cannot be very healthy or happy and therefore will not have many babies, and we’ll suffer for it! Once the children all chased after a kitten for quite a while, and finally they caught it and brought it to me, proudly handing it over. They thought I would want to put it in with my bunnies! I said they should kill it; as this was shortly after the dog incident, I figured a cat could kill bunnies too. Well, they didn’t; they just let it go, and while the boy who was holding the bag lowered it to the ground, all the other children scattered! They were scared of the kitten, and some of the smaller ones even cried when it ran among them to get away! I find that they actually are scared of animals and I’ve decided that it’s because they don’t understand them. They think they have to chase the animals, or the animals will chase them! I blame such misconceptions on lack of education. 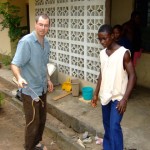 Someone else commented about snakes, asking if there were many in Palmgrove. Yes, there are! Lance always said that he never saw many animals here. I’ve seen a lot! So far, except for the snake chase I wrote about in an earlier blog, I’ve seen about 4, all dead, luckily. When I go down to the barn in the mornings, I’m really paranoid about wading through the grass because they are around now, especially since the rains are starting and everything is growing ‘like a weed.’ No, Michelle, I haven’t tried a snake steak yet, but I will if I get the opportunity. I’ve tried the snails, cow hocks (another name for that is cow tail), and no, I haven’t tried the termites and don’t plan to! The children catch them, stuff them into their mouths and wait for your reaction! Lol! So, snakes are around. Ed was walking by the chicken barn 2 weeks ago, when plop! A snake dropped from a palm tree down onto the sidewalk right beside him! Yikes!! The snakes climb trees and drop down on their victims sometimes too. Brian helped demolish one; it slithered into the bedroom of one of the houses. And this one the boys killed; it was inside Palmgrove, near the gate. 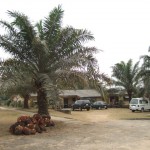 Matthew and Annemarie: the fig (or Jackfruit) tree behind Ita and Glory’s house is gone. I went to look for it after I read your comment, but they said they cut it down. Instead there are mango trees, malina, shaua shaua, and palm trees.

About the curtains: Someone inquired if they were a luxery. Well, I guess not because every house and mud hut has them. The bigger, rich houses outside have steel or wood doors and mirror panes for their windows. But the curtains; it’s a funny thing. Ed Vetter keeps shaking his head. No matter how hot it is, the Palmgrove people will always have their curtains pulled, no circulation. We put ours back as far as they go in hopes of catching the slightest breeze. Tsk, I don’t know about these people sometimes. They also use them for their doors, which are open during the day and so the curtains provide some privacy.

There have been comments about the motorbikes and requests to see pictures. Well, I don’t dare take pictures in town, sorry. Brian sometimes tries to sneak some, but through the window they aren’t very good, so you’ll have to be patient. Maybe we’ll figure out a way to get some in the future. We don’t want to be seen taking pictures outside of Palmgrove, because someone may come and harass you about it for money. Anyhow, hope this helped some with the questions!

“For now we see in a mirror, dimly, but then face to face. Now I know in part, but then I shall know just as I also am known. (I Corinthians 13:12)

Hi Leanne and Brian
If you want to see or hear wild life in Palm Grove try the early morning hours back behind the Chicken and Hog barns, five or six in the morning . And for heavens sake stay our of the tall grass.

Hello U way over there..!:) glad to hear ur all doing great.. (or is that a slight overstatment..??).. 😛 in no time U’ll be ‘jungle wise’.. that cant be just handed to u, it takes time, experience…. anyway, are most of the snakes u talk about, poisoness.?? they seem huge, and well fed, wow.. wouldnt want to cross ones path..
again, nicely written and wonderfull blog..!!
keep up the good work..!! God BLess.!!

Thats a beutiful snake you got their. did you know they climb trees

Hey, Leanne love your blogs. You have some awesome topecs. I especially enjoyed the “snails and other strange foood.” Very interesting hmmm sure killed my appetite. So you don’t plan on trying some of those juicy termites. Oh, well there can’t be to much protein on them anyways=) God Bless you and your work. Keep looking up!

LeAnn, I have a favor to ask of you. This is now almost mango time. I saw the beautiful, huge mango trees loaded with mangos just before we left for home as you also show in your blog. Hundreds of the largest, also medium sized are dropping to the ground. Emanuel David told us, they are being shed as the weakest. Bust a myth for me please and take a bunch home and maybe they will ripe in a weak or so like we do with our tomatoes. Pleeeease.

Eddie Cascade? hi! what i think you mean is that they throw away the fruit before it can ripen, yes that is true. i find if a fruit is not perfect, out it goes! you can’t tell them anything. Sometimes Brian and i go “mango tree climbing”, he risks life and limb, excuse the pun, scampers up, shakes a branch, i gather some fruit. those that are ripe we pound back right away, the unripe ones i take home and after a few days they ripen like our tomatoes, that’s true. they won’t bother to do that even if you tell them. new ideas are something that are practically impossible to ingrain!