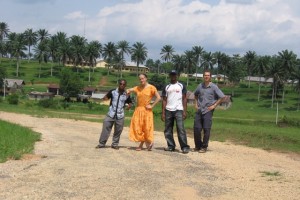 A few months ago Leanne, Amase, Dan Dan and I were out sight seeing. We had two motorbikes and we basically drove around to see what we could see. We saw an old palm oil refinery that was rusting away because of mismanagement, as well as a University of Agriculture and all the nice trees they planted. The weather was nice and the trip was even nicer. After a few hours of driving around, the bike I was sitting on lost its shifting lever and so we had to turn around, look for it and bolt it back on. At that point we decided that we had seen enough and asked the two boys if they knew a nice place to sit down.

Dan Dan said that he knew a nice quiet place in Abak that served cold drink, and he thought we should go there. We went there and spend a lot of time talking about just anything. After we were finished we got on the bikes and headed home. Dan Dan then decided that he wanted to go to his uncle and asked if I wanted to go along. I agreed and off we went.

As it turned out, his uncle was not just an ordinary person. He was a police officer. You see, here in Nigeria police are not well trusted because they are notorious for being corrupt. But like all police all over the world, some are good and some not so good. I myself know one or two personally that are quite nice. In fact, unlike in the past, the police don’t have very many check stops and are not a big problem. Before I came, I was told that I might have a lot of trouble with police asking for bribes or something. To the contrary I have only had two incidents in which policemen asked or exacted money to let us by. In general most people are left alone.

This uncle’s name was David. He was very friendly and courteous. He owned a very nice house and was in the process of building a wall around his area. Inside, the house was nicely furnished and well kept. He invited us in and we sat down and watched cable TV. Judging by what I saw, he seemed to be about thirty-eight years old and he had a few young children running around. While we sat there, his wife came in and offered Dan Dan and me some gari and gari soup. Of course they were all watching to see if I would eat the gari with my hands as most of them do. I have to admit it is something that took me a while to get used to. None the less, it was good gari. After some time we said goodbye and left for home.

Then a few months later Ezekiel and I were in Abak doing the usual running around trying to find that specific item in the local shops. Of course as we walked down the street we were always greeted by total strangers. After a while this becomes very tiring. The fact is, in the time I have been here, I have met only one white person who lives here in the town of Abak. That means that every person that sees me has a reaction inside. Some will show it and some won’t. In general the people are very friendly and only want to be acknowledged.

So that was what happened. We were walking down the street and someone called after us. I kept on walking, but after a few more calls by the person, Ezekiel looked back and saw someone in a car waving for us to come over. This person had stopped in the middle of the intersection when he stopped for us. I wasn’t interested but Ezekiel went across the intersection to find out what he wanted.

Once he was there, Ezekiel called me over. I didn’t recognize this stranger and obviously showed it. He then told me he was the person that had invited us to his house and that his name was David. That was when it clicked and I recognized him. We said Hello to both of us and then invited me to come to his house again. He had just called us so he could say hello. Afterwards, I thought it was very strange that he didn’t have on his police uniform and wasn’t inside a police car.

That was also the last time I saw him and it was about 1:30 PM. The next time I heard his name mentioned was when Ezekiel, Leanne, Time (the local electrician) and I were heading to Time’s house. I always find it amusing that someone would be called Time. Anyways, it was about 6:30 PM when Leanne received a text on her phone from one of the people at Palmgrove. The message was that David the policeman, Dan Dan’s uncle had been assassinated.

You can imagine the shock. Why him? Where? Who and when? There were many questions in my mind and after a few days the pieces started to come together. David was an investigator for the DCI, probably the equivalent of the FBI in the USA. He seemed to be highly regarded by people all over the town of Abak. Almost everybody I talked to seemed to think that he was assassinated because of his hard effort at stopping crime. Most people were shocked at what happened and I often heard people worrying out loud if things were getting out of hand. Even though most people resent the police, they seemed to respect this one. So now I understood why he was always dressed in civilian clothes.

Dan Dan was his nephew and had been with him that day. He must have joined him after we said hello to David. At some point Dan Dan decided that he needed to go and practice soccer. It was about half an hour after Dan Dan had left, that he was killed. The shooting happened at the very restaurant that Dan Dan had recommended as a place to stop when we were cruising with the bikes a few months before. This was because the restaurant happened to be owned by David. By what I heard and understood, six hired assassins approached David’s vehicle from behind and shot him in the head from the sides and back while he was still in the driver’s seat. They then took his own gun and shot him with the ammo in it. By the time the shooting stopped, David’s head and body was riddled with bullets. It was a very sudden and shocking incident.

The reason I am telling this story is because I find it very disturbing that I had just gotten to know David and had shaken his hand four and a half hours before. He had no plans for death. He was just going around doing his everyday business. Now his children are orphans and his wife is a widow. If Dan Dan had not gone and played soccer, he would more than likely also been dead along with his uncle whom he admired so much.

Looking back I wouldn’t say that the violence in the town of Abak and the Abak Village is that high. There is the occasional crime, but usually it isn’t rampant. I have heard that the crime goes up in December. That is when they do a lot of celebrating. All I know is that so far the guardian angels have been protecting Palmgrove Community and for that I am deeply thankful.

wow, what a story. Mahap all the prayers going out from here to palmgrove helps..
Take care and see u soon

Hi Brian and Leanne
Those are the type of things and experiences that will keep a part of your hearts in Nigeria years after you will have gone home. May God keep you safe. And speaking about coming home,Hope to see you soon. Love you all. IJK PS. My regards to Dan Dan

well, thats.. different. Here today and gone tomorrow. That goes for all of us.

our sympathy and prayers going out to dan and the rest of the family. may the guardian angels continue to protect palmgrove and everybody else in nigeria, god bless.