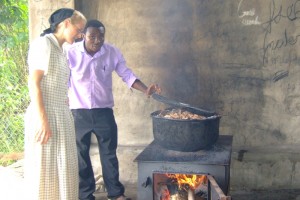 May 4th, , which was Sunday, we randomly BBQ/ed a pig. Actually management decided to get rid of all the pigs in the barn because they are costing us too much feed and they are not bringing any money back. As Palmgrove doesn’t have a consistent income now, we really can’t afford to feed them.

So, there we all were, sitting in church listening to Inno’s sermon on Freedom. What is the definition of “freedom” as a Christian, he asked us? Does it mean doing what you want? One definition he gave us is that freedom as a Christian is our ‘ability to follow Christ.’ Inno said that it’s a shame to us if someone has to ask if you are a Christian; they should see that we are one by the way we live and talk! Freedom does not mean doing what we want, when we want, how we want. Inno read from I Corinthians 10:23:24 “All things are lawful to me, but not all things are helpful; all things are lawful for me, but not all things edify. Let no one seek his own, but each one the other’s well being.” The ability to know this is Freedom! 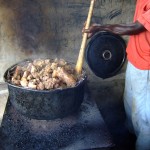 Anyhow, there we were, sitting on our superbly narrow, hard benches, and every so often along came an invigorating breeze, wafting the tantalizing smell of roasting pig meat into our appreciative nostrils! Occasionally we were distracted from the interesting sermon by this not too unwelcome scent! Gaudi and two of the boys, Emman Dan and Otto Ubong were cooking the pork over an open fire. They had gotten up around 4 or 5 to butcher the sow. Before church, which starts at 10, I had peeped in to see what they were up to; they had all the pieces cut and deboned. After church, I grabbed the camera and went back to look again. This pail contained the guts, what we would use to make wurst. I think so anyway. Don’t we use cow gut to make wurst? Well, they made pepper soup with it. They made me try a piece so I did just to say I did it. Reminding myself that I eat it when I eat our sausage at home, I tentatively chewed on a piece of the gristly guts…; well, it was ok enough, if a tad slimy. It tasted like the peppers and spices they put into the broth. Needless to say the boys liked it very much! I then took home some of the bones that 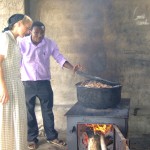 were lying on the table and cooked them to make some buckwheat soup, which is always good and healthy to top it off! All you need is some eggs. That day we had supper in the dining room, eating pork which was served in a tasty tomato sauce! Though, eh ..um, rather chewy (to say the least), it was very good!! Meat is not something that you get too much of over here.

Let me tell you about our beef escapade now. Yesterday, being May 27, was Big Market. When I was just a tenderfoot here in this African land, that word struck fear into my little heart because it was a bit of an ordeal to me to go to big market. Now, being a bit used to how things are here, going there is ok, though I’m quite happy when I arrive back home. There are so many people there and all call out to me to buy their wares and food, but I’ve learned to either ignore them, poor dears, or to pretend I don’t understand them, or to just say “I don’t need fish, onions, etc.” I don’t like to shrug off all those sweet grannies, but what can I do. I can’t buy the whole market place just because my skin is white, now can I? Anyway, this big market is every 4 days, except when it falls on Sunday, then it will be Saturday. That is when everyone brings their food, animals and wares to sell. So if there is no big market, then there will be just a few people selling things, and while you can still find what you are looking for, it will be a bit more expensive. Actually, if you really need something, then big market will more likely have it than any other time. I would love to have some pictures to post of this market, but they tell me to forget it. The people won’t allow us to take pictures of it. So, sorry!

Ok, so the day before big market I got this bright idea of a “steak”. You know, to eat, a hot and sizzling beef steak. Knowing Brian hadn’t been in big market yet, I said to him, “tomorrow we will go to big market; you’ll come along, and we’ll get ourselves a red, juicy ribeye”, and I privately chuckled to myself thinking, now I’ll be the “pro” at market, and we’ll see how Brian takes it! He was game for the plan, and the next day we went to Abak with Egypt as our driver. We wound our way through the stalls to the building where they sell beef. Actually they don’t say “beef”; they say ‘cow meat.’ I had been in this building once before, and was impressed that in so hot a place with no fridges or freezers, this building was clean and smelled nice and had practically no flies! They butcher the cows early in the morning on market day, and have the pieces lying on the table, ready to cut anything the customer might desire. Here’s our problem! I had told Brian this before leaving, saying that I hope he knows his meat better than I do, because once it’s all lying there deboned and sliced, I don’t know a leg cut from a good steak, and seeing they use almost all of the cow, inside and out, you can see some pretty strange pieces that you didn’t know cows had! So we walked around the tables, admiring the interesting views. Did you know they eat the stomach of the cow? Anyway from how they explained it, that is what we think it was, a greenish, hairy, rubbery thing. So, we talked to various venders, and they all assured us that yes, yes, of course it was a tender loin or ribeye ,whenever we asked about a certain piece. And we soon got the idea that they would agree to anything if only we would buy it. Before coming, I had actually stuck a recipe book that had a sketch of a cow carcass with all the pieces labeled in my bag in the hope that they might then know what I wanted. And so there I am, white female standing in the middle of an African meat market, and I cleverly whip out my book and point to the picture. That procured more nodding heads and “yes, yeses”, and after trying this on two sellers, I stuck it back in my bag. We did finally find the chunk of meat that at home we would cut rib eyes out of, but since they don’t exactly have a band saw to make nice cuts, we ended out with a slab of meat that was cut along instead of across. Picture the ribs of a cow, now imagine cutting a square piece of meat along that rib. They use machetes for everything and that doesn’t really cut the bone; it would, but it would make a mess of the meat. Anyway, back home we threw our ‘steak’ on the pan, no fire, and chewed expectantly. And chewed and chewed some more! I don’t know why it was so tough; maybe it needed aging? I don’t trust letting meat sit for a day in this weather, so that is out of the picture. Anyway, we got a bit of protein that day!

just want to let you know we’re still thinking of you. here’s a little beef tip. beef should be aged for aboutr 24 days, so the enzymes can work on making the meat tender. God bless!

Nah, just take a sledgehammer and pound the living daylights out of it! That should tenderize it nicely!! lol

Great to hear that you are venturing out with more confidence! Keep up the great work and may God be with you all!

this looks very interesting…but still diffrent from the way we butcher them…so u didnt help in butchering them??? too bad..did they have a diffrent tast from what ours taste like???/
would be neat to know how they really do it
have fun
gods blessings

lol
I actually had to read this entry out loud to the rest of the family and the guys in particular found it really interesting and needless to say- amusing.

i wouldn’t dare eat aged meat around here, so even if they age it, i wouldn’t taste it. whenever we buy ready made (fried/cooked) chicken, beef, liver, fish, any meat product, i make sure i ask if it was prepared the same day. Us white people can’t take the risk of eating old meat, we are not used to it like the blacks. There are no freezers or fridges to chill the meat to keep it safe for consumption.

I figure they butcher the animals just like we would at home, except they keep almost all of the animal to eat! They just use machetes for everything.

The beef we ate that day didn’t taste like beef very much, i even argued a bit with Brian that it was pork! Except that we saw the cuts, so i don’t know why that was.

LOL LOL, I was chuckling the whole time i was reading this thing! Priscilla even had to say ‘Shhh!’ a few times. (:P) Next time we’ll be chowing down a juicy pork chop or a tender ribeye i’ll eat an extra bite for you and Brian. (A)
hugs

there are a million things we take for granted, and it’s wonderful to be reminded of them when we read your blogs!! who’d have thought it’s just a chore to get a steak? and we have everything coming out of our ears, er, mouths!! 🙂 Thanks for reminding us of our many blessings!! Thinking of you, dear Leanne and Brian!

So you had a steak dinner! Or was it a cow meat dinner? 🙂 You are getting right up town! Guaranteed a lot of people will be thinking of you the next time they will eat a piece of meat! 😀 Cheers! 🙂

Hello Leanne and Brian
I’m so proud of the two of you. I think I would have starved by now. You are a brave lady! Just being at the market would probably make me want to hurl. I can’t wait to hear the stories we you get back home. Take care.

Hi Leanne and Branch.
Keep up the good chewing. Nice to hear you still have a sense of humor. You make us proud everyday.