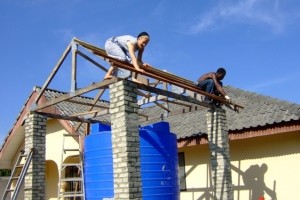 I know, I know, it’s June already, but this project took place in May. In reality it was a small project, but admittedly it took almost all of May to complete. You see, the water house has a big plastic tank standing outside, near the building. This tank is an extra, as in backup, in case water needs to be treated with chlorine or some other such purifying substance. Being exposed to the sizzling African sun, this tank was in danger of housing algae and other unwanted components so a roof was needed for some shade. And so the prolonged project proceeded.

First, a trip to the timber market was needed, to purchase some of that fine African hardwood. That wood is heavy! Just ask Lance. It’s funny; at home you can carry a 2X4 with one hand; here it almost needs two people to haul it to where you need it! Brian and I always comment that their wood is harder than their cement. The cement blocks they mix and make to build houses and walls will crumble if you drop them from a height of a few feet. So it’s a good thing that their wood is so tough. But to cut it by hand is a job that will have you sweating and your arms shaking by the time you saw through one 2X4! I can boast that I cut quite a few of these pieces for the rafters….What do you say Lance? I ‘helped’ make the three rafters we needed. We even used some Acadia Colony rafter steel plates to hold them together. We had to hammer these plates into the wood with a hammer, which is not only noisy, but takes quite a few muscles. So, with these two strong objects, the wood and the plates, we had some pretty sturdy rafters, if I say so myself. 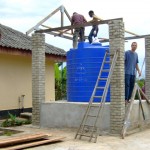 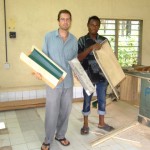 Next was getting the heavy rafters up on the pillars. Most of the puem helped, and they were up eventually. Here is Brian smiling proudly for the camera. I helped with the next part, nailing the purlins onto the rafters. These purlins are to hold the tiles. The boys made these tiles while work was being done on the roof. We ran out of the granite needed to make tiles, so we had to buy 100, 000 naira worth. Apparently you can’t buy it other than a whole truck at a time. Once I expertly finished nailing the purlins, we hauled the tiles over to the water house with the quad and put them up. The tiles look really nice for a few years, but the damp and rain makes them black with mold eventually. Judith said she’s washed quite a few tiles in her lifetime; when they need to repair a leaking or kaput roof, the tiles all need to be taken down, and then they are put up again when the repair work is done. Then the women who were here at the time washed them, so they looked nice again for a while, especially the red ones. These are made the same way except they add dye, which is costly, so we left the last ones they made plain grey. With the roof now finished, we are one step closer to completion of the water house!

Nice job on the roof there! You two are really turning into quite the Jack of all Trades. Sounds a tad more difficult than the fence we put together. But hey, we need some of that African hard wood, THAT’ll keep our beaver horses from chomping through it!!(:P)
blessings

The roof looks really good. I wouldn’t mind having one of those in front of my house when you get back, you know like a gazebo. I would imagine that both the missionaries and the young men from Palmgrove would feel pretty good about a job well done.

Keep up the good work

on a non a mos said:

who did the fine work building the pillers with these nice bricks? are the bricks home made?

Good job Brian and Leanne.I like when my dad reads the blog for me and i like to see how you live and work in Palmgrove. We pray for you and will keep praying for you.

🙂 Nice work Brian. I hope you are getting all the help you need from the young guys over there. It seems like a lot of work! Good Luck with it all!

I noticed all that help from the buem too. Wippin them into shape are you.

If the wood you use is harder than the cement, how can the termites bite into it?

How long does it take for the termites to devour the wood?

I appreciate your entries.

someone you know said:

just curious as to how long you guys are staying?…take care, great job…God bless!!