Any Tips For The Gardeners? 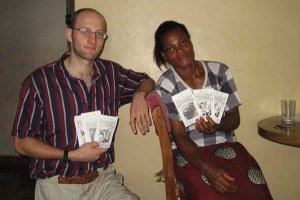 Hey Jonathan (Keystone)! I finally got those seeds that you sent in the mail! It took about 20 days. Who would have thought that they would actually get here? And for four dollars, that’s quite reasonable enough! It’s going to be an interesting experiment to see what will happen! Maybe there are some people reading this who could give us tips on how to go about planting and taking care of watermelons, melons, honeydew melons and tomatoes in this kind of environment. Judy Basel said, that when they tried planting tomatoes a few years back, the plants were beautiful, but the insects had all the fruit for lunch. The watermelons grew well too, but they burst open because of the heat. We gave half the seed to Glory to plant, the other half Talitha and I will plant. Maybe between the three of us we can get something.

They say that most of the produce like that comes from further north, near a city called Jos. It’s at a higher elevation and therefore a bit cooler then here at the coast. Right now, we are heading into the rainy season. Supposedly it’s cooler then normal, if you consider 30C (86?F) to be cool. The temperature only goes down to about 20C (68F) at night, and the relative humidity always seems to be between 80% to 100%. The heat isn’t all that hard to get used to, but it’s the humidity that really gets to you at times. The soil here is very sandy, it doesn’t look very rich, but with a bit of fertilizer we could improve our chances. If anybody has some experience growing these kinds of plants in this environment, it would be nice if you could add a comment or email us. Thank you in advance, Lance

Sorry Lance, can’t help you with that! I wish you luck though, a watermelon would be wonderful…wouldn’t it?! I can’t imagine how you guys get any sleep. And I think it’s too hot to sleep in summer here! I’ll just think of you guys when it’s hot and it’ll automatically be a lot cooler. Wish you luck with the garden thing. Take care of yourselves!

Greetings Lance
To cut down on some of the heat, maybe you could build a little greenhouse–Not one that is enclosed. I saw some pictures of a greenhouse somebody build in Africa and it was open on both sides and at the ends. I guess it’s more of a canopy for shade. Maybe that’s all it would need. Good luck!

Hi Lance,
Wouldn’t it work if you put some kind of netting over the plant so the insects can’t get to the fruit? I don’t know if this would work. Just an idea!

The soil shouldn’t be a problem, as watermelon and tomatoes like sand soil. If it becomes hard and compacted, it would be a good idea to incorprate some organic matter such as manure(if there is some) to try and loosen the soil.

well, at least it’ll be easier weeding with that sandy soil lance! talitha will be spoiled once she gets home and will have to ‘kompf’ with the gumbo once more.
couldn’t you set up a trellaced cover for the watermelon or isn’t it the direct sunlight that bursts them? if it’s the humidity well then i dunno… we haven’t planted ours yet. what kind of vegetables can you grow in Palmgrove?
have fun with your ‘gartleing’

Try peanuts–they should do well there. Ask a nursery or some farmers what grows so you can plant local, disease-resistant varieties

HI LANCE AND EVERYBODY

About gardening , Anna and me tried a few different types of plants, some where OK and some where a disaster, if your going to use seed from home at least try some local verities. Go to Uyo with Ita and find some that he Knows that will grow in your climate.
Use a lot of chicken or pig manure for fertilizer, mix it in before you plant . If you don’t have pigs theirs probably still some wast in the pit behind the pig barn or some of the Palmgrove brothers may have but some aside. You will need to plant on ridges so the rain want wash everything away, ask Ita about that . and remember to look after it because it’s a very worthwhile project, theirs nothing better then to be able to go and pick what your used to. I will sit down with Annamerie and give you more details about what type of plants are worthwhile.
Matt

Hey ,
Well could u not cover the mellons with a shade ? that would keep them cool ? And the insects ? Do u have merigolds in palmgrove ? Planting them near the mellons will prevent that ! Dont know for sure if it will work in nigeria , they probally have other insects , that can take the merigold smell ! How much sun do u have ? mabe to much water ! that could happen to be the reason the burst ! watermellons like dry condetions , i think we will have a large crop this year ! Because it is so dry !! Keep it up !!