Written by: The Bridge on Tuesday, September 5th, 2006 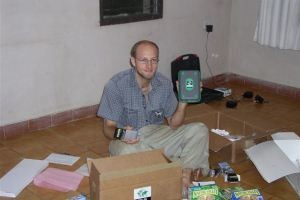 In the past few months, together with the help of Haven Colony in Minnesota, we have been experimenting with a different type of computer to see which one would be best for a place like this. Jonte send us a new PIC to try out. The PIC is designed for hooking up third world countries to the internet. It comes with a USB mouse, keyboard and a small, really small CPU. As you can see in the picture, it’s about the size of half a cereal box. Everything comes preinstalled, meaning you can’t install anything on it and it updates all the programs that it has through the internet. That way it isn’t susceptible to any viruses or worms, which is a major problem with any computer hooked up to the net.

We don’t have internet access here in Palmgrove but we tried the computer just to see how tough it is and if it’s the best way to go. One of the good parts about this computer is that if the power goes off then the computer stays off until you restart it; unlike a normal computer where the power will stay on. This is important in a third world country because the power blinks on and off, just like Christmas lights. You can about imagine what that does to a normal computer. I’m surprised that the ones in the computer lab are all still working! The problem that I run into with the PIC is that I want to install educational programs for children, typing programs and others. So I don’t think that this is the best option. We are using the PIC primarily for writing emails and accounting using excel. Oh, I also put all the pictures that I take on it so that the kids can look at them. They get a real kick out of looking at all the different pictures. It also has a good tutorial on it that teaches the basics of working with computers.

Right now we are looking into different PC’s that would serve us better. There are quite a few good options out there, however, I ran into an unexpected issue. Apparently the Canadian and Nigerian government don’t see eye to eye very well, so there’s a bit of political friction. We were supposed to be able to renew our Visas in Nigeria every 3 months, but they now changed the rules and only allow us to do it twice, which comes to six months. So Paul, Clara and I are leaving by the end of September. That doesn’t give me enough time left over to look into it. However, I think the kids and adults have a pretty good headstart now, hopefully they will continue. Some of the better ones are up to 30 wpm typing speed, quite impressive for only a few short months. So hopefully we can leave a few positive things like that behind.

Well, glad to hear you’re still…with it. 😀 I’m sure Ed Vetter’s leaving affected the progress, but I’m sure you’re doing fine anyway. 🙂 Right? Anyway, Irvin wants me to ask who that…”_____ ____” on the background (desktop) of your computer is. 😛 😀 Take care cousin, see ya soon.
Lotsa love,
Charlotte

Yes, too bad you can’t finish all the stuff you intended to do. But then, maybe the list is unending and would never be finished! Either way, I’m sure the people will be grateful for your six months there. We’ll be glad to have you home again. See you october 1!

Eh, now Char! You like the picture too, well I do too 🙂 I wanted to see if you were going to notice it or not. I did want to write a blog on beekeeping here, but I’m not sure I’ll get around to it, We’ll see.

we want a blog on “beekeeping in Nigeria!” you can do it!

How about a blog on “the mud hut people” that live in the jungle around Palmgrove. With photos of there neat little mud huts.

Rachel and I want to commend you on all you’ve
been able to accomplish as a group!It’s really
noticable and your efforts will not be in vain.
It sure helps to have this blog to inform the
rest of us back home what’s happening over there.God is certainly using you to touch these
people and to help them physically and Spiritually as well.God Bless all of you!
P.S What about a blog on reptiles? Any encounters with a snake yet?

Hi Lance,
Have you heard of the “One Laptop per Child” project spearheaded by MIT? Designed exclusively for developing countries, this impressive piece of technology is cheap ($100), durable, energy efficient, open-source (Linux) and can be powered by a handcrank if necessary. Pretty ingenious design, really.

Hey lance,
No installations possible seems a pretty cool idea if u want a reliable comp. Deff going in the right direction.
Your problem with the (other) computers going back on can be remedied quite quickly in the BIOS. You can designate if you want the comp to “stay off” “stay in last state” or “stay on”.
Hope this helps,