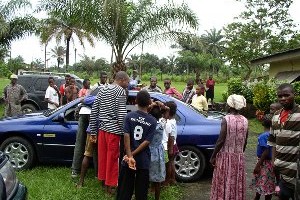 On August the 1st, Edward, Judith and Talitha left for home, after a four month stay in Palmgrove. The last Sunday, before they left, we had a farewell supper in the dining room, with many outside friends joining in. Supper started around 7, they served chicken peppy soup, a real good Nigerian dish. After that, the choir sang some songs, then small groupsand individual peoplewent up to sing or say a few words. The children like to go into the middle of the floor and dance away, everybody seemed to be enjoying themselves. Most of the pictures you see are dark because the sun goes down around 7. Being this close to the equator gives us about 12 hours of daylight year round. 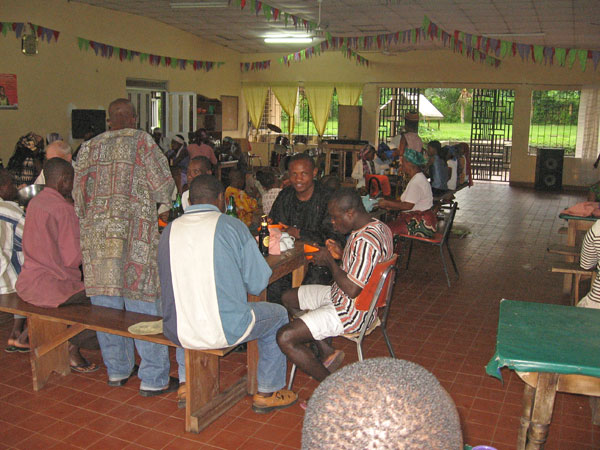 Eddy Vetter, I don’t know what we will do without you, there are so many things still left to do, I’m not sure we will manage. Thanks for all your hard work and effort, as the saying goes ‘Es vet dio pelunt vejen’. Judy Basel, we’ll try to keep things clean and the gardens weed free, I’m not sure how good a job we will do! Talitha, who do you think is going to teach the women and girls how to make bread with that oven that is to be coming in the container? Sorryoo, I can’t do that for you! For those of you who may not know, the container was shipped from Canada in March, hoping that by the time we will get to Nigeria it will be here too. It’s now August and it’s still sitting in Port Harcourt stuck in Nigerian red tape, waiting to be released. With a system like that in place, it’s no wonder Nigeria takes one step forward and two steps backward.

On the last day, we went around the place looking at things that still need to be done. We got quite the list together. Then after dinner everybody came over to say goodbye.The children stood lined up in the hallpatiently waiting and talking. Then the guys carried the luggage out to the waiting car. After a lot of hugs and hand shakes theyleft around 2 in the afternoon,leaving behind a crowd of waving Palmgrove people. It’s about a two hour drive to Port Harcourt, their departure time was around 11 at night, which is too bad because you can’t see much at night. I’m sure it would have been interesting to see Nigeria from the air. So I hope you all had a safe and not so tiring journey homeward.I just hope you don’t forget about us out here!