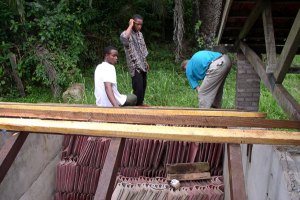 Most of the buildings in Palmgrove are roofed with cement roofing tiles. We started making few batches for some badly needed repair. Most of the buildings already need a few new ones, because of cracks or holes. Just a few simple repairs that would go a long way in preventing a lot of damage to the structure underneath. Seems like this side of things has also been neglected in the last number of years.
Making the tiles is quite a simple process. They mix sand, granite and cement together; everything is done with a shovel on the floor, no fancy machines. A certain amount is measured into a form where it vibrates for 10 seconds. It’s then taken and placed on a plastic form where it hardens overnight. The next day they take it and place it into a small room where it slowly cures under the hot African sun. We’ve made a few hundred already, but we still need more to replace all the damaged and missing ones. The curing room didn’t have a roof on it, so we went and made a simple one using sheet metal so that it would get nice and hot underneath to aid in the curing process. Roofing the room was a simple job, but around here everything takes a lot more time. Here we have a picture of the roofing crew with the roof almost complete.

Another one of the projects was, putting a new roof on the small building that is next to the main kitchen. As you can see in the picture, the old roof was made of tin, and seeing they cook with open fires, it corroded away, there was almost nothing left. On the plus side, at least the termites don’t bother the wood, as it’s always being nicely smoked from the open fire. We replaced the tin with asbestos sheets which is quite a popular way of roofing a building around here. In the picture you can see they made a nice new cement floor instead of just bare sand. They want to put some fireplaces there, so that they can dry gari and other things.

After work the boys sometimes sit around and play a card game they call whot. It’s similar to Uno that we play at home, only the cards look different. Sitting outside in the cool of the evening with the guys is a nice way to wind down the day. Recently they also put up a volley net, everybody is taking every opportunity they can get to play a few games; even the older people try their hand at it. This time of the year it rains a lot, on and off almost every day, which interrupts quite a few games. It’s a very slow time of the year because everybody likes to stay home instead of going out in the rain.

eh-HUM, i must say, (beam) “I” am am quite the profficiant Uno player myself! Most famous for my skills (just ask the right people). When you are home I’ll have to challenge you to a few games! Can’t you make a video clip of a volley game?

Hey! Happy Birthday!! Did you get a cake or something? A squirmy shish-ka-bob? anything?

Leanne, ha!!! if I remeber correctly your Uno playing ablities leave a lot to be desired!!! I’m not sure if I’m up to that challange.. yet lol! Anyway I would have posted a few video clips, but I need the computer that’s on the container, can’t do it without that. So we’re still pataintly waiting while the Nigerian officals make us run around in circles. If you want more details you’ll just have to phone.

If you wouldn’t be on the phone all the time we’d get a chance to talk to you! Well, at least we try but, it doesn’t go through. Volly? You play volly in nigeria..hey, you’re doing better than you did over here…humm,,,anyways, send us some pictures of your birthday party…Can’t wait to see you in a fancy nigerian birthday costume!

Hi Lance,, so you had a birthday….hope it was well spent..here is a belated wish for a great birhtday… anyway hope you have a peaceful journey and keep up the great work..it will surely not go without being appreciated..take care…

Hi there!
Have spent many years in Haiti. Had a friend who did a lot of work with fiber-cement roofing tiles. Made them exactly as you described except:
1) Included chopped up (3/8″ long?) local natural fibers.
2) Cured the tiles under water for about 3 weeks.
You might consider trying this to improve quality and longevity.
Regards, Robert

Hi Robert Lieske, intersting consept. These tiles are quit brittle and break easily, espically when they get older, maybe we can come up with something more durable. Thanks.