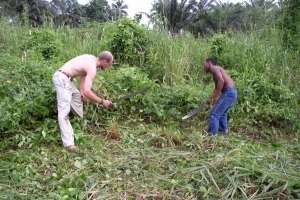 With the help of some boys we made a small garden plot to experiment with growing the type of plants that we grow back home. Because of the heavy rains, they have two ways of making a plot of land ready for planting; they either make ridges or make beds. The ridges are used in bigger farms and the beds are made for smaller gardens. The beds are the better option, but they are a lot more work! I asked Kypo, the farm manager, where I could plant and he showed me a small plot behind the generator plant. Most of the land available inside Palmgrove is being used for growing something, so it was actually rather hard to find a place to plant.

First things first, the land has to be cleared of weeds and especially elephant grass. This grass can grow very tall, you could probably hide an elephant behind it, maybe that’s where it got it’s name from. The weeds are cleared the traditional way, with machetes. It works a lot better if they’re nice and sharp, otherwise you put in a lot more effort. No lawnmowers or anything like that, besides the weeds were ways to high for a lawnmower. Emase and I cleared the area with machetes, that took us about an hour or so.

After that the soil is tilled, and once again no tractors, all hand work. It was hot, which made for quite the workout. This time some of the younger ‘mandle’ showed up to help out, that sure was nice. Halfway through, we took a water break, and the boys used the camera to take pictures. They enjoyed learning how to use the camera and got the biggest kick out of it at times. Sometimes they try to take pictures of themselves, like the boy in this picture. Some of the better pictures that I get are when I let them have the camera to take any picture they want while we work. We sat around for a while trying to cool down, while some of them played around with the machetes.

Making the garden bed is quite the art in itself! First they dig a trench around the perimeter and pile the soil along the outer edge to form a ridge. Somehow they manage to get a nice flat bed with a nice peak around the perimeter. I don’t know how they do it, I tried but I had to give up and let them do that part, I just couldn’t figure out how they do such a nice job. When they are finished it’s perfectly flat and sure looks professionally done.

We planted string beans, tomatoes, watermelons, melons and peanuts. The peanuts we planted first, then after two weeks we made the other two beds and planted the rest. The peanuts are growing nicely, they should do well because they like sandy soil and hot conditions, so something is bound to turn out. Everything was pre-germinated before it was planted, except for the peanuts, which we just got from the local market and planted directly into the soil. Afterwards, we went down to the stream to cool off. I showed the boys how to stay out of the water and wave both hands in the air at the same time. We had fun trying, it was a nice way to end a hot days work.

Hey Lance you don’t seem to be getting a tan

Hello there! I wish you and the rest of your family great luck with your amazing work there in Nigeria 🙂 I love the pictures, I’ve not seen such beautiful countryside before, and the pineapple plants are amazing!!!

I’m trying to figure out how to get updates on your blog so I can keep tabs on how things are going.
Take Good Care, and God Bless.
~Elaine

Oh, I just read in the rules that I need to state which colony I am with…I’m not with a colony, but had found you through the website hutterites.org, and I’m trying to learn more about my family’s Hutterite heritage. I hope you don’t mind my saying hello.

Anyway we can get the pictures in the article?
In the RSS feeds?

hi lance!
phew! and we thought it was hard work weeding and hoeing here in the heat! sure glad we don’t have to wield a shovel to plow! i think you’ll have to weed quite a bit yet!
with the peanuts you’ll be able to make all the peanut butter you want, or do you have an abundant source? we got the jar you sent! mmm…you should go into buisness!
oh, way to go with the ‘eggbeater!’ lol, good that you remember something of that Course!

Those beds do look nice and….tilled. c’mon, guys…show us the roto-tiller already. 🙂
Must have had a nice workout getting all that ready. How long did it take?
Wondering…Have you tried to start any bee colonies yet? (being you ARE bienen-konig back home.) I’ve been reading about Africanized honey bees that are slowly spreading across North America, displacing native bees. They seem vicious little things, easily angered, and very protective…Have you encountered anything of the likes?
Take care; God bless.

Hello Bruido,
Gee, wish I could come and help you there, a nice little workout is always nice. I sure hope there will be fruits for your labor. We think of you a lot, the blogs are great. Good luck with the garden…

Hope that things will be able to keep improving at Palmgrove. Eddy Vetter’s report was encouraging but also challenging. You guys have accomplished much, but much more needs to be done. We all support you with our prayers! May God be with you all and lead and guide you!

“Blessed is he who considereth the poor; the Lord will deliver him in time of trouble”. Prov. 41:1