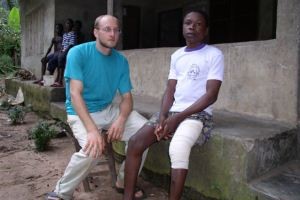 One morning awhile back, when Eddy Vetter was still here, a women came with her son who had had an accident a year ago. A motorcycle hit him and broke his leg and hip. After that happened, the father left home so that he wouldn’t have to pay for anything and now the women and her 4 boys have to fend for themselves. It’s still a young family and the women didn’t have enough money to pay for the hospital, so the leg was never fixed properly. We did give her some money to help out, but it wasn’t enough to fix his leg.

Now that Eddy Vetter is back home, he must have told the story and some kindhearted soul donated $200 specifically for the boy; we don’t know who. We called the women over and give her that amount, which would come to approximately 25,000 Naira. I went over to her place to take some pictures of the boy. I told them that whoever had donated it wanted to help them, but we don’t know who. She didn’t know what to make of it! She said, “God bless whoever it is”. She couldn’t speak English very well, I had one of the boys along to translate. It will certainly go a long way in helping them. It’s been almost a year now since the accident and the bone that was broken is completely out of alignment. They showed me the X-ray, it was a complete break above the knee, with the bones overlapping each other. I asked them if the doctors could still put it back into place and she said they could, I sure hope they can! So thank you, to whoever you are for your generosity. If only you could see how these people live, you would realize that by themselves they will never earn enough for the operation. For them it’s a huge sum of money. To give you an idea of how much it is, a professional nurse here would make about $100 per month and common laborer would make around $50 to $60 a month. So thanks again.

I think there’s probably a lot of people in the U.S. who would donate to help people like this. Isn’t there some way you can organize your charity so that it’s also incorporated in the U.S. so it’s tax-deductible for U.S. citizens? Thanks.

Notice to people in Canada and the US. who would like to donate or help in such or similar situations… The organisation called Providence Christian Services is registered in the US and Canada.. Tax-deductible reciepts can and will be given to anybody who requests one..The headquarters and mailing address is–Providence Christian Services..Box-10,,Ste Agathe, MB..Canada…If any question = Edward Kleinsasser,,204 433 2529 ,, edwardklca@yahoo.com