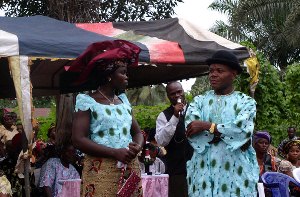 On Saturday, Glory’s brother, who lives outside Palmgrove had a traditional marriage. Most of the people in Palmgrove were invited. I decided to go along and see how they celebrate a wedding in Nigeria. Getting there was quite the experience in itself; it wasn’t too far from Palmgrove but the roads into the jungle were just terrible. Instead of one tire going into the pothole, the whole vehicle goes into the pothole then out the other side. It had rained that night, so every hole in the road was full of water. Once we arrived, there weren’t all that many people there yet, so we sat around and waited. When people finally showed up, the bride’s family sat on one side, the groom’s family on the other, with a large space and a table in between. There was a band playing and surprisingly enough, it sounded pretty good, in that the speakers weren’t overworked and squealing like they often do around here. They had someone playing the keyboard, drums, electric guitar and even a trumpet. The main singer was standing in front of one of the big speakers, so every time he moved his head too far to the left or right there was serious feedback, because his mike was right in front of the speaker, other then that it was pretty good.

They started up with piling the table in the middle full of food. Lots and lots of good Nigerian dishes, like gari, fufu, ekpangkukwo, rice peppy soup, coconuts, bananas and many others that I don’t know the name of. The food was provided by the groom’s family. The ladies that prepared the food first introduced every dish by opening the container and showing everybody what it contained. Needless to say, everybody was really hungry by the time they finished introducing it! Then the ladies were asked to come up and help distribute everything, so that everybody could have their fill. This all took place outside on a sandy floor, so it was quite interesting to see all those high heels sinking into the sand and spraying sand with every step, it was different.

After everybody had there fill and the food and drinks were put away, it was time for the groom to arrive. So the groom’s family and relatives got up and went to look for him. They came back with him, dancing and waving while people all around them showered them with money. The groom in the picture is the one with the hat and cyan coloured Nigerian style suit. They slowly danced around the circle collecting the money that people threw at them. After that he is called over to the bride’s side and someone looks him over to see if he physically fit enough. They make him do a small dance and also make him kick in the air just for the fun of it. Everybody howls with laughter as he does the necessary performances.

Then money has to be paid to the bride’s relatives so that they can go and bring the bride’s parents. Of course the price paid is never quite enough, so they argue about the price and pay more and more until they are finally content and go and bring the parents. The crowd welcome the parents with much dancing and waving, and once again they are showered with money from all directions. The parents of the bride then sit down at their place of honor. Two girls now come along and ask for money to go and get the bride herself. Once again a great show is made about the price, the girls aren’t quite satisfied, so they go out and bring in somebody else instead of the bride. Of course the groom isn’t too happy with this arrangement, so he finally hands over the desired amount for them to go and get the bride. Now it’s her turn to dance into the circle and get showered with money. The bride is then asked by the parents to point out the particular person whom she wishes to marry. She is given a cup of palm wine and must go and present it to the groom. The young guys get a big kick out of this part of the ceremony, they call out to her but she ignores them and goes around searching for her man until she finds him and presents the cup for him to drink. After he drinks, he puts money inside the cup and they go over to her parents and present it to them.

The groom then gives a bottle of good quality alcohol to the bride. She must present it to her father as a gift from him, and then another bottle of wine for the mother. After this, the parents and closest relative stand together with the bride and groom in a circle. The groom takes a glass of wine and drinks from it, then also gives it to the bride to drink. She then goes around the circle and gives them all to drink from the cup, as a sign that they are witnesses to the marriage. They then kneel in front of an elder and he blesses the marriage. Of course, this being the twenty first century, there were a few people around with the cell phones with built in cameras who were busy taking pictures, especially of this part of the ceremony, which seemed to be the most important part.

A table is then brought in with a special dish made by the mother of the bride. It’s something made with melon and is presented under a cloth covering. People go over and put money under the tray and take a peek under the cloth to look at it. When enough money is given, the groom removes the cloth and the married couple eats it and shares it with the closest relatives. This whole ceremony is what they call a traditional marriage, they also have a wedding at a church afterwards, even if it’s years afterwards. The traditional marriage is what’s most important to them.

By this time it was getting dark and I decided to go home with the next bus. Fourteen of us piled into a eight passenger bus and off we went. Oh, did I mention that there were a few guys on top of the bus as well? They call it a bus, we would call it a van. As a whole it was an interesting experience.

One can only wonder about the purpose behind the actions.

It never fails to amaze me what “the world” does/holds for traditions, what their ceremonies are like. The emptiness is almost shocking… not only in this African country but in the western world as well.

This is just an external, and therefore more readily obvious, example of the ways in which we, the Hutterian church, sharply differ from outsiders. Marriage is actually a spiritual bond between two souls which are already married in a different way (Baptism). Without this, any attempted marriage is worthless. So it’s better they just have a party as this entry describes; instead of pretending to have a marriage before God.
On the other hand, we must remember that reflecting on this matter will do nothing to increase our own humility; instead it might encourage the ol’ pride to seep in, so take care! -And uh.. excuse me for thinking out loud.

Everything they do has some kind of symbolic meaning, don’t ask me about it to much because it’s sometimes hard to understand. And I also missed a lot of what was going on because it wasn’t done in English I only asked about certain things afterwords.

Ok, I was not quite observant enough to realize that you faced language restrictions in this particular case. It’s easy to forget they speak a different tongue.

hey Lance, that experience sounds like fun! Guess what it puts me in mind for! (yes, think along the line of “weddings”, ha ha) i liked reading this entry, reminds me of our own traditions and where they come from, what they orginated from. :D, maybe we should adopt the ‘checking if he’s pyhsically fit enough, that would be a hoot!

leanne are u nuts?

which of our traditions do you mean? and how do they compare?

Oh come on…Leanne’s just being funny. I’m sure we could make a good skit with some of that stuff.

i never ‘compared’ the traditions. what i meant was, THEIR traditions just put me in mind of our own and of OUR’s origins. i WAS talking to lance, you have to remember, and i alluded to a skit we had done at one of our last weddings, a skit that had to do with our hutterite traditions.

i was in the dark about the whole skit deal. thanks for clearing it up!

wellll it’s their form of ‘aufredn’, is it not? lol

Hi Lance
this sounds so ..Different 🙂
how much money did they pull out of you?

Lance, I believe you missed out on a real Nigerian experience by not hauling yourself on top at that van on your way home….ventilation would have been much better !!
Needless to say, I certainly prefer our own traditions, as long as they don’t interfere with what a Christian based marriage should be all about!!!

Leanne, now that you mention it, that skit that we did at a wedding awhile back did have some things in it that I was wondering where in the world it came from. I bet there are lots of hutterites who don’t have a clue where a lot of the things we do at our weddings come from and what they represent. I sure didn’t know most of the stuff that was in that skit!

Those high heels…..Funny!!….Hey Lance, really enjoy reading these blogs and seeing all those interesting pictures, sure makes u appriciate with what we’ve got back home, but sounds really interesting being where you are, machs Gut unt Gottes segen

Quite something!! After reading this we’ll always be bored at our weddings!! Well…maybe not, if we can get a “I remember it well” in…neet? Glad you got to experince that, even though you were too chicken to try the ‘more ventilated’ part of the ‘bus’…
alles gute

hey guys.
I think we should take into consideration a little the people that you are talking about here. These traditions mean as much to them as our hutterite traditions do to us. we should try to be a little more careful about what we say about other people and their culture. Its what they grew up with, and we should try to respect that, not make jokes out of it. To call this just a big party and not a marraige? Thats making a lot of assumptions and in my opinion, judging these people and condemning them. Let’s keep Jesus in mind!

Dear #15, when I made the statement above I was not doing so in disrespect! What I actually ment was that I preferred our own traditions because that is what I was used to and grew up with and more importantly because of the deep spiritual truths they portray and pass on to me! Actually, without this they would be void of meaning, and would never give me the deep satisfaction and fulfillment that they do now!!!