Homosexuality, what are we to make of it?

It seems everywhere you turn these days you see and hear of gay pride, gay marriages, homophobia, gay tolerance and gay bashing.

What are we Hutterites to make of all this? Where should we stand? Didn't Jesus talk of love and forgiveness?

Matthew 19:4-5 “Haven’t you read,” he replied, “that at the beginning the Creator ‘made them male and female,’ and said, ‘For this reason a man will leave his father and mother and be united to his wife, and the two will become one flesh’? So they are no longer two, but one fl....
Read the rest of the entry...
Published in: Louie Vetter's Blog
homosexuality
19 Comments

The Pentecostal holidays are some of the most important days that Hutterites celebrate because those days commemorate the descent of the the Holy Spirit on Christ’s Apostles, the beginning of the early Church and the arrival of the first apostolic communities. Hutterites follow this example and share material goods in common.

After Jesus was crucified and then rose from the dead, he spent 40 days on earth showing himself to be alive to many and speaking of the things pertaining to the kingdom of God.
Then before Jesus ascended into heaven....
Read the rest of the entry...
Published in: Louie Vetter's Blog
Acts 2, communal living, pentecost
6 Comments

We are asking for your prayers for Gene Stahl who had a very serious accident, and for his wife Evelyn and his family. Gene is the father of seven children: daughters Crystal, Carmen, Geena and Taya; and sons Travis, Cody, and Anthony. The manager of the beef operation at Deerfield Colony, near Lewistown, Montana; he is 38 years old; devout Christian, family man, and hard worker.

The colony runs 900+ range cows on Sage Creek, about 15 miles from the home place. Gene, an accomplished horseman, who has been riding since the age of three, was m....
Read the rest of the entry...
Published in: Louie Vetter's Blog
accident, prayer
41 Comments

There Went Out A Sower to Sow 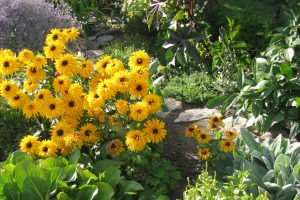 It's springtime on the colony.

The doldrums of winter are over, the grass is greening, the trees are budding and it's time for sowing. The early morning air is filled with the chirping and songs of the newly arrived birds of summer. The April and May showers have replaced the cold dry air of winter with the fresh earthy smells of spring. Newness and excitement fills the air and soul alike.

The equipment operators, restless after a winter full of shop and barn work are bursting with energy and anxious to start the annual sowing season. The....
Read the rest of the entry...
Published in: Louie Vetter's Blog
agriculture, seeding, spring, Sunday
4 Comments

Why did Jesus have to Die

The simplest answer to this question is also the best one. To pay for our sins.

But, why do our sins need to be paid for? Do they carry such far-reaching consequences?

In society there are laws. There have to be, to protect the innocent and to ensure that everything runs smoothly, orderly, and efficiently. And if those laws are broken then there are consequences and a price has to be paid. Sometimes monetarily, sometimes with community work, sometimes with jail time and sometimes with life itself -- as in the death penalty.